From the RuneScape Wiki, the wiki for all things RuneScape
Jump to navigation Jump to search
The Old School RuneScape Wiki also has an article on: osrsw:Prifddinas Agility Course
For the other Hefin Agility activity, see Serenity posts.

The Hefin Agility Course requires level 77 Agility (boosts do not work) and completion of Plague's End quest to access. Found in the inner ring of Prifddinas in the Hefin Clan district, the course traverses the entirety of the Hefin district, going up to the top of the Hefin Cathedral and then back down again.

In contrast to most other Agility courses, actions performed on the Hefin Agility Course can never fail, regardless of Agility level. Experience gained for traversing every obstacle and the full lap bonus are scaled and increase every 5 Agility levels. It is not possible to leave the course by any means other than finishing it (or dying), as teleportation is not allowed.

Completion of Plague's End is required to access all parts of Prifddinas, including the Hefin Agility Course.

Total experience with and without boosts:

Breakdown of experience rates. Values in parentheses refer to Agility experience gained during the Voice of Seren.

The Hefin Agility Course features a unique Velocity mechanic. Players can freely toggle it on or off in an interface that appears when training on the course. If this feature is enabled, a velocity bar will slowly fill after every obstacle traversed. When the bar is filled, the next obstacle will be traversed automatically, without any input from the player, while still gaining agility experience from the traversed obstacle. This results in the bar getting reset and the cycle starts again. A timer is also displayed on this screen, showing the amount of time a player takes to complete a lap (this resets after each lap).

When the Voice of Seren is active, the Velocity bar will be completely filled in one lap. 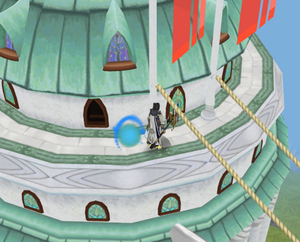 The light creature shortcut on the roof of the cathedral. 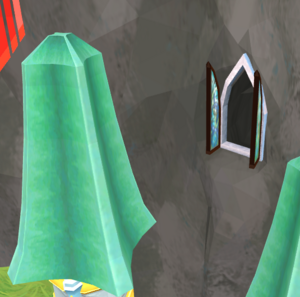 The window shortcut in the side of the mountain.

At the end of every lap, two shortcuts have a chance of spawning on the course. The chance of them spawning is increased when the Voice of Seren is active, and both shortcuts may be active at the same time. They disappear as soon as another lap is completed, regardless of whether or not they were used during that lap. If the velocity bar is filled, shortcuts will be used.

A chatbox message notifies the player when one appears:

A window shortcut has opened in the Hefin mountain.
A light creature has appeared on the roof of the Hefin cathedral.

A perfect lap, including the time taken to go from creature to leaping across the walkway, is approximately 42 seconds, or 70 game ticks. In order to maximise experience per hour, a few things need to be taken into account:

After every lap, players have a chance to obtain a reward from a light creature. A list of potential rewards is given below.

After completing 200 laps on the course, players will be awarded with the title of the Hefin. To check progress towards the title, hover over the word "Time" in the velocity interface. After unlocking the title, the count just says 200+.

When completing a lap in over 10 minutes, players will be awarded with the title [Name] the Meandering.