From the RuneScape Wiki, the wiki for all things RuneScape
Jump to navigation Jump to search
This article is about the settings interface. For the general topic, see Graphics. 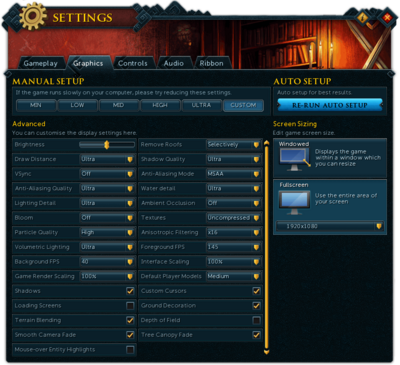 The settings interface for Graphics

Graphics settings are a set of options that allow customisation of the display of RuneScape.

On the desktop NXT client, there are five graphics presets: "min", "low", "mid", "high" and "ultra", each increasing in graphical fidelity. Advanced settings can be individually customised; doing so turns on the "custom" option.

Auto setup selects the best settings for a balance between visuals and performance based on the computer's hardware. Auto setup runs when starting the client for the first time and can be run again at any time by selecting the "re-run auto setup" button. 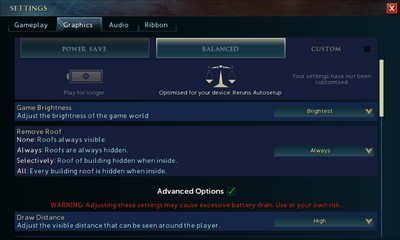 The graphics settings interface on mobile

On the mobile client, there are two presets: "power save" and "balanced". The balanced preset functions the same as auto setup, selecting the optimal settings for the phone's hardware. Manually adjusting individual settings will tick "custom" box. Most settings excluding Game Brightness and Remove Roof are hidden unless "advanced options" is toggled on.

Brightness controls the level of overall lighting and shade. On the NXT client it is adjusted with a slider.

On the mobile client this setting is called Game Brightness which has the following settings:

Draw Distance determines the distance objects and fog will render from the player.

Shadow Quality controls the detail and render distance of object and scenery shadows. This option requires shadows to be turned on.

Anti-aliasingis used to remove aliasing (pixelated edges) when rendering objects. This option must not be set to off to adjust Anti-Aliasing Quality.

Anti-Aliasing Quality controls the level of detail of anti-aliasing. This option requires that Anti-Aliasing Mode is not set to off.

The Water detail setting controls how detailed water is rendered.

Lighting Detail controls ambient lighting. There is no option to turn lighting "off".

Ambient Occlusion controls shading of smaller and more intricate models with a greater specificity in detail. It can only be enabled on supported hardware.

Bloom is a lighting effect that controls additional brightness and impact of glowing effects.

Anisotropic Filtering improves the appearance of textures, particularly terrain, when viewed from extreme angles and distances.

Volumetric Lighting adds additional lighting effects such as crepuscular rays. This option requires shadows to be turned on.

Foreground FPS and Background FPS controls the maximum frames per second that can be rendered when the game is the focused or unfocused window, respectively. These options can be set at intervals of five between 5 and 300 inclusive. Vsync bypasses this setting if it is set to a lower synchronisation rate.

On mobile, both of these are consolidated into a single setting called Frames Per Second and can be set to the following:

Interface Scaling affects the sizes of interfaces within the game window. This is useful for higher resolution monitors where the default interface size may appear very small. The values range from 100% to 300%, in varying increments of 10%, 15%, and 35%.

Game Render Scaling affects the resolution that the 3D graphics are rendered at. The default is 100%, and a game render scaling value lower than 100% may improve performance at the cost of visual quality. Conversely, a value higher than 100% will provide smoother visuals at the cost of performance. The values range from 50% to 200%, in 10% increments.

Turning this option on replaces the cursor with Custom Cursors when in game. This option can be toggled off or on.

This setting controls whether or not loading Screens appear when the game world hasn't fully loaded in. This option can be toggled off or on.

This setting is not present on mobile and as such loading screens cannot be turned off.

This setting controls whether or not ground decoration such as grass and rocks are shown. This option can be toggled off or on.

Terrain Blending determines whether or not textures on tiles can blend with other adjacent tiles for a more fluid appearance. Turning this option off forcibly disables textures.

Depth of Field causes distant objects to be blurred. This option can be toggled off or on. Turning on this option requires draw distance to be set to high or ultra.

Smooth Camera Fade causes objects that clip with the camera to be smoothed out. This option can be toggled off or on.

Tree Canopy Fade determines how the tree canopies behave when the player character is hidden behind them. Turning the option on causes the canopies to fade out around the character. The more canopy there is between the canopy and the character, the greater the fading effect.

Mouse-over Entity Highlights causes interactable objects to have a glowing outline when they are hovered over and clicked. Interactable scenery has a cyan outline, monsters a red one, and non-attackable non-player characters a yellow one. Clicking the objects makes the outline to flash brighter, and even objects with no left-click options receive a grey flash (e.g. examine and player character operations). This option also causes the player character's silhouette to appear through the scenery when there is scenery between the camera and player character. On mobile this setting is called Entity Highlights and reacts equivalently with long-presses and taps.

FPS Display is a mobile only setting that toggles a window that displays FPS (frame per second) and other information in game. It is identical to the displayfps command being entered into the Developer console on the dekstop client.

Screen Sizing affects the size of the game window.

There are preset options called min, low, mid and high with increasing graphical fidelity for each of the changeable graphics settings. There is also the option for auto setup that tries to select optimal settings for your hardware. The following advanced settings can be manually customised and doing so changes the preset to "custom".

Display mode chooses which API the client will use to render graphics:

CPU usage controls how much of your computer's resources the game can use. Despite the name, it appears that CPU usage refers to resources from the CPU and the graphics card.

This setting controls when roofs are removed.

Lighting detail controls ambient lighting. There is no option to turn lighting "off".

Particles are extra fuzzy or small effects that are created without polygons or textures. This setting determines how many objects are allowed to generate particles.

Max screen size determines what resolution the game will be rendered for when using fixed mode. It has no effect on the other modes.

Brightness controls the level of overall lighting and shade. It is changed with a slider.

This setting controls whether or not ground decoration such as grass and rocks are shown. This option can be switched either off or on.

Flickering effects are fullscreen flashes that provide dramatic ambience to an area. An example of such an area is the Killerwatt plane. This option can be switched either off or on.

Character shadows are shadows that appear under NPC and player models. This option can be switched either off or on.

A fog appears at the edge of the render distance to obscure unloaded objects.

Custom cursors are mouseover cursors that are specific to certain actions. This option can be switched either off or on.

Ground blending determines whether or not textures on tiles can blend with other adjacent tiles for a more fluid appearance. This option can be switched either off or on. Turning this option off forcibly disables textures.

Textures are extra skins that are placed over models to give an appearance that polygons or other graphics cannot. Textures requires ground blending to be on.

Skyboxes are backgrounds added to the main backdrop, behind the overworld. Skyboxes paste an image over the blank canvas background that creates a fuller ambience for the setting. While not all areas have specific images to add as a skybox, this setting also controls blending and sky colour, to an extent. This option can be switched either off or on.

Bloom is a lighting graphics setting that controls additional brightness and impact of glowing effects. The effect was mentioned in the developer blog for RuneTek 5 as one of the additional graphical effects that will be possible in HD mode with the new engine. Bloom requires lighting detail to be high. This option can be switched either off or on.

This information has been compiled as part of the update history project. Some updates may not be included - see here for how to help out!
Retrieved from ‘https://runescape.wiki/w/Graphics_settings?oldid=35684926’
Category:
Hidden category: