From the RuneScape Wiki, the wiki for all things RuneScape
Jump to navigation Jump to search
The Old School RuneScape Wiki also has an article on: osrsw:Gravedigger
This article is about the random event. For the emote, see Gravedigger (emote).

Gravedigger was a random event that players might have triggered when engaged in any type of activity. When the event occurred, a gravedigger named Leo would immediately teleport the player to an old graveyard that contained five open graves, each containing a coffin. Leo would then speak, explaining what he wanted the player to do for him. This included picking up all the coffins, peeking inside to determine what bones are in each coffin and placing them in the right grave according to the spinning headstone.

If the player did not have enough empty space in his inventory, they could use Leo's Mausoleum as a deposit box. To operate the Mausoleum, players clicked on items, and they would be deposited in the player's bank. The player should not deposit any items that he might need after being teleported back to RuneScape. Also if you don't feel like completing this event, you can talk to him and he will ask you if you want to give up.

First players had to remove the five coffins from their graves. Inspecting the coffins, players then identified what relates the items. Reading the gravestone showed an item that matched items from one of the coffins. Place coffins in graves that match completed the random event.

The images below showed coffin and grave matches. Gravestones and items inside the coffins were originally grey and white but were later coloured to make it harder for macros to complete the event. 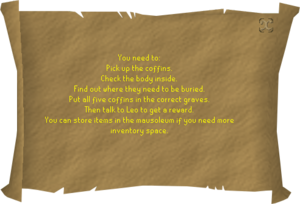 After being teleported back to RuneScape, the player would receive a reward for correctly completing Leo's task. The rewards included the five pieces of the zombie outfit and two emotes, one of which may have been chosen from the Random event gift. If a costume is chosen, players had to visit Thessalia's clothes shop in Varrock to claim it.

A list of the rewards is given in the following table:

A player is digging up or burying a coffin
Retrieved from ‘https://runescape.wiki/w/Gravedigger?oldid=35812035’
Categories:
Hidden category: