From the RuneScape Wiki, the wiki for all things RuneScape
Jump to: navigation, search
The Old School RuneScape Wiki also has an article on: osrsw:Mute 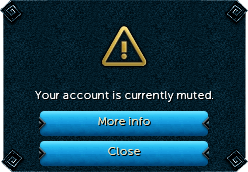 A mute is a form of punishment used by in-game Player Moderators and Jagex Moderators (Customer Support team) to those who are guilty of breaching the Rules of RuneScape.

A Mute Meter in the Account Status system shows what zone of offence a player is in. The red text is displayed when a player has been given a temporary mute by a Player Moderator or an automated mute from the ChatWatch system. 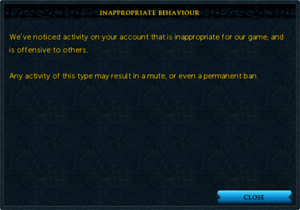 Being warned about Inappropriate Behaviour

A muted player will not be able to talk in-game (except through Quick Chat) or on the Forums; however, they can still play the game as usual and trade with other players.

If a player is on their last chance and they commit an offence, they will be permanently muted or possibly permanently banned. Also, if a player is muted for website advertising or real world trading, they will be banned by Jagex right away. Mutes may be appealed if the player is past the green zone. Many permanent mutes have been reported to expire after a period of one year. A mute can also get quashed by a Jagex Moderator.

In the early days, mutes were not obvious to the player. Anything they typed would only be visible to themselves, similar to a shadowban.

Mutes are a way of stopping more damage from being done to surrounding players by the rule-breaker. In some cases, a rule-breaker may not have been aware that they were breaking the rules, so a mute actually may save that player from being reported multiple times by many players. Mutes given out by Player Moderators are temporary one hour mutes, just long enough for Jagex to investigate the situation or longer if it's deemed necessary.[1] Muted players are also barred from posting on the RuneScape Official Forums.

Since 21 May 2008, muted players are able to communicate with others in the game, to some extent, by using the Quick Chat system, so being confused with macroers does not happen any more. There is no option on Quick Chat to inform other players that they are muted, however there is a phrase that says "I can only use Quick Chat."

It is currently not possible to mute players completely; some muted players keep repeating a random Quick Chat line, annoying the others. Reporting this behaviour is not useful, instead it is advised to add such players to one's ignore list.

A hidden update was added to the game, where players that said the name of a prolifically advertised gold-selling site in one or two lines would be automatically muted for 48 hours upon log out. This was later removed due to players tricking others into saying it to get them muted.

On 18 September 2012, the auto-mute returned for various phrases typed in-game to mute for varying lengths of time.[source needed]

The mute system has faced criticism from players for perceived flaws and issues. Among these are that Player Moderators are able to immediately mute players for up to 48 hours, even with insufficient or no evidence to support the mute. Additionally, players have pointed out problems with the appeal system, citing long appeal processes that sometimes take longer to resolve than the mute's duration.

Before the offence system update in May 2009, players with perfect or near perfect records who received minor mutes were not even given the chance to appeal the mute. The appeal would be deferred until a more serious offence was committed. There are still occasions where muted players are not able to appeal their mute, by having the committed offence not listed, thus making the appeal option unavailable.