From the RuneScape Wiki, the wiki for all things RuneScape
Jump to: navigation, search
List of resolutions? (edit)

List of resolutions is a list of tasks that players can complete to unlock a new outfit, four new emotes, and a conga dance walking animation override during the New Year's Resolutions promotion on Treasure Hunter. Gold star stickers which can be won on Treasure Hunter can be used to skip tasks.

After the event, if the player attempts to open the list of tasks from their inventory, the item will be automatically destroyed and a game message will appear in the player's chatbox: This item has no more use! 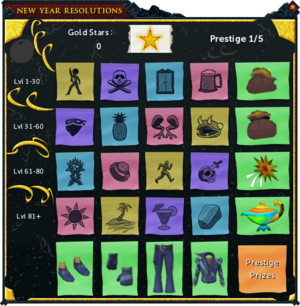 The interface for the list
Retrieved from ‘https://runescape.wiki/w/List_of_resolutions?oldid=27877144’
Categories:
Hidden category: