From the RuneScape Wiki, the wiki for all things RuneScape
Jump to: navigation, search
For the currency from Deathbeard's Demise, see Phantom doubloons.
Item JSON: {"edible":"no","id":"32094","stackable":"yes","removal_date":"11 April 2016","death":"always","name":"Doubloons","bankable":"yes","gemw":false,"equipable":"no","members":"no","disassembly":"no","restriction":"limited","release_date":"15 September 2014","release_update_post":"Rune Value Improvements","lendable":"no","destroy":"Are you sure you want to destroy all held doubloons? You cannot reclaim them; you can only find more.","stacksinbank":"yes","removal_update_post":"Morytania Madness - Plushies - Myreque Memorial","highalch":false,"weight":0,"lowalch":false,"tradeable":"no","examine":"Collect these and swap them for pirate swag.","noteable":"no"}

Doubloons are a currency won from Treasure Hunter – Talk like a Pirate Day! event, from killing any Pirates, from pickpocketing NPCs, and by training Agility at Brimhaven, that can be exchanged for pirate-related items.

When receiving doubloons, the message You have received [AMOUNT] doubloons. is shown, and they are automatically added to your inventory. 5 doubloons are received when killing and tagging the ticket dispensers in the agility arena, while 3 are received for pickpocketing.

After the promotion, doubloons can be converted to coins, at 10 coins per doubloon. 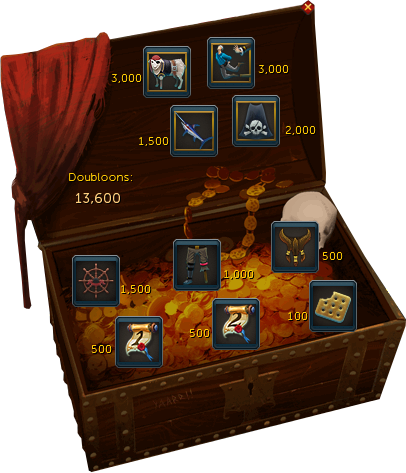