King's Ransom is the final quest in the Camelot quest series.

Life has been quiet at the Sinclair Mansion since you discovered the murderer... too quiet. So quiet, in fact, that the family has gone!

Suspicions are running high that the Sinclairs' recent departure is tied to the disappearance of King Arthur and his knights. But time is running short and clues are scarce, will you crack the case in time?

To begin, speak to Gossip outside the Sinclair Mansion - he explains to you that the Sinclairs have packed up and left after incriminating Anna as Lord Sinclair's murderer; Gossip explains that one of the family members provided new evidence to prove Anna's guilt. He will also mention that King Arthur and his knights suddenly disappeared at the same time as the family's departure.

Agree to investigate, and head onto Sinclair property. Speak to the guard in the garden, and he'll profess that he thinks that the Sinclairs have something to do with the mysterious disappearance of the Knights of the Round Table from Camelot; he also suspects that the disappearances may be part of a bigger plot to reclaim Camelot. The guard will further divulge that the Seers' Council has forbidden anyone to enter Sinclair Mansion or Camelot, but since you've helped them earlier, he will allow you a part on the investigation in the mansion. 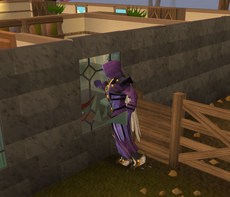 Breaking in through the window.

Since the main door is locked, head to the eastern side of the mansion and break the window to reach the interiors of the house. Take the scrap paper near the dining room fireplace, on the ground floor[UK]1st floor[US]; the note contains some unintelligible scribblings, seemingly related to Camelot. 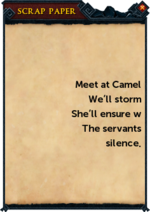 The contents of the scrap paper.

Take the stairs up to the 1st floor[UK]2nd floor[US] library, and take the empty address form that proves that the Sinclairs left for good and never intended to tell anyone where they were moving. Search the bookcases in the same room as the address form to find a non-equippable black knight helm.

Exit the mansion through the broken window and submit all three pieces of evidence to the guard, who notes that there is enough to prove bad intent towards King Arthur. Unfortunately, since he has to follow proper procedures, he will have to wait a month before presenting the evidence; you offer to avoid the bureaucracy. He will recommend that you learn more about the Sinclair family history, suggesting to approach the town gossips.

Speak to Gossip outside the mansion, and follow through all the chat options to learn about the Sinclairs.

Head to the Seers' Village courthouse, located south-east of the bank, and speak to the guard there. Ask him if you can speak with the prisoner, Anna Sinclair; when he approves, bring up a dialogue with Anna. 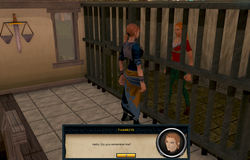 Anna Sinclair in the court jail.

She exclaims that the murderer you had suspected previously is setting her up with forged evidence, but gives up, saying that no one is going to believe her. Ask her where her family has gone; she says she has no clue since they disappeared after she was locked up.

As you go to leave, she will make a deal to help you get into Camelot in exchange for help in receiving a not-guilty verdict. She will then hand you the criminal's thread that you found on the window in Murder Mystery. Anna suggests that the servants may be able to provide testimony in her defence.

Although not necessary to progress in the quest, you may go back to the mansion and speak with the six servants - Pierre, Hobbes, Louisa, Mary, Donovan the Family Handyman, and Stanford - to gauge their statements at the trial.

(Note that if you leave the courtroom or logout at any time, all your progress will be lost. As such, you may restart the trial whenever you make a mistake)

Once you are ready, go back to the courthouse and go down the stairs to start the trial.

During the trial, you must call witnesses by talking to the judge and question them. The questions available correspond to those asked while in the mansion. To successfully clear Anna of her charges, you must rebut the evidence put forward by the prosecutor without providing more incriminating information against Anna (for example, bringing out testimony which puts Anna near Lord Sinclair's meal before he died).

The evidence provided by the prosecutor include:

To acquit Anna, call the following witnesses and ask them the respective questions:

The judge will end the trial and ask for a verdict - the jury releases a not-guilty verdict against Anna. Successfully saving Anna, exit the courtroom through the gate.

Note: Currently the UI in the courtroom is bugged and the options to interact with the court official and the witnesses is displaced to the right of where they actually should be. It is possible the camera may not rotate either. Point the camera north before going in to the trial to be able to click on the witnesses and judge.

Talk to Anna in her cell, who is just as brash as before the trial, and she will tell you how to enter Camelot - you must complete the entire dialogue or you will not be able to get into Camelot.

The location of the statue that hides the secret passage. 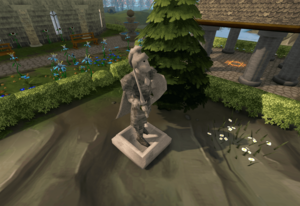 The statue that hides a path into Camelot.

You must now head to the north-east side of the Camelot castle and search the statue near the temple. As you enter the castle, a cut scene ensues, wherein Anna is seen talking to David about setting you up to free Anna. They explain they have no intention to help you and call upon Morgan Le Faye, who appears and knocks you out with her staff.

You wake up in a jail alongside Merlin and the Knights of Camelot. Speak to Merlin to gather the situation - all the Sinclair kids and Morgan Le Faye have teamed up to usurp Arthur and reclaim the Camelot castle with the help of the Black Knights; Morgan has also stolen the Holy Grail and turned King Arthur into a granite statue, to be transported elsewhere by the black knights.

If you leave the jail, it is possible to reach back by either searching the statue again, or by attempting to enter the grounds of Camelot through the main gate.

Ask Merlin what he suggests they should do, and follow through the entire conversation. Try to reach the vent at the top of the wall, opposite the prison gate; a funny cutscene shows the knights making a shaky pyramid to help Merlin escape through the vent.

If you escape through the vent yourself, you will appear at Keep le Faye. Simply exit the front doors and try to open them from the outside to be returned to the prison. 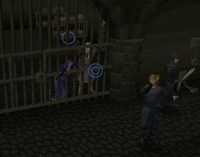 Speak to all the knights, and ask them if they have anything useful to help them escape. You will get an assortment of items, including an air rune, a law rune, an empty vial, a cooked fish, a normal log, and a bottle of vodka.

If you received a lockpick (or have a Master thief's lockpick on your tool belt), use it on the jail lock; if not, use Telekinetic Grab on the guard fixing his hair outside the cell to obtain a hair clip, which you can use to unlock the gate. Either way, you will now need to solve a puzzle to unlock the jail lock; the puzzle very closely resembles the popular board game, Mastermind.

To beat the puzzle, you must set each of the four tumblers at the correct height.

A way to do this is to set all tumblers to the lowest height and try the lock.

Continue these steps until the gate is unlocked.

The table of containers.

You will emerge at the base of the Keep Le Faye - Arthur's knights will be engaged in battle with the Renegade Knights. Do not try to leave through the front door, as Morgan Le Faye will put you back in jail. 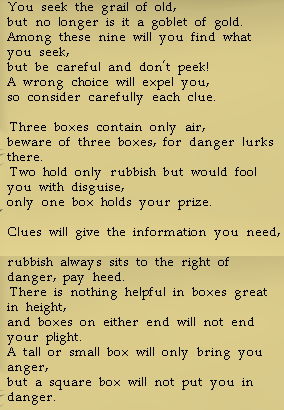 Riddle to the Holy Grail.

Climb up to the top floor and search the table full of containers; one of these holds the coveted Holy Grail that was stolen by Morgan, and the correct container hides behind a clue, in the form of a riddle, that you must solve to retrieve it.

The correct box is the purple and pink cylinder, second from the right.

Items needed: The Holy Grail, granite, a bronze med helm and iron chainbody, and the animate rock scroll (if you already have one)

With the Holy Grail back in safe hands, all you need to do now is figure out a way to locate and free King Arthur from his stone prison. Speak to Wizard Cromperty in the north-eastern part of East Ardougne.

Cromperty explains that to free King Arthur, you need to use the same process that saved the girl during One Small Favour, although this time you will also need to unravel Morgan's spell. If you don't have it already, he will give you an animate rock scroll to use on King Arthur, with the Holy Grail and some granite in your inventory.

You are required to go through all the chat options with Wizard Cromperty, otherwise you won't be able to free King Arthur.

Equip the bronze medium helm and iron chainbody and head to the Black Knights' Fortress. Some quick ways to reach the fortress are using the Combat bracelet or Edgeville lodestone to teleport to the monastery, or the Skull of Remembrance to directly appear inside the fortress, after which you'll have to descend down to the building entrance.

Inside, climb down the ladder to the west of the entrance to find King Arthur; unequip the bronze med helm and iron chainbody before using the free option on his statue. Bring the king up to speed by talking to him and give the guard's uniform - the helm and chainbody - to help him escape. Leave the fortress and return to Camelot, where you must speak to Arthur to finish the quest, and receive your reward. 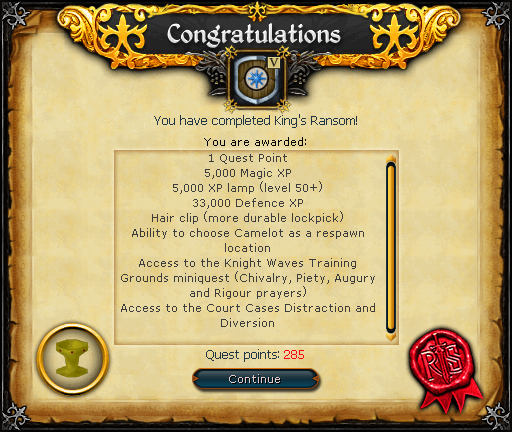 King's Ransom is directly required for the following quests/miniquests: