Upon opening the box, members are given a choice of 6-14 random items to choose from. Non-members are given a choice of 4-11 items to choose from. All existing Frog tokens that players had prior to the update were turned into Random event gifts as well, even if they should be in a bank of a former member whose bank space has been locked. The converted gifts can be withdrawn and restored at will, though attempting to bank recently obtained gifts will simply result in: "A magical force prevents you from banking this item."

The box is also considered an all-in-one toolkit as it has many resources, most of which are used in quests. Attempting to open the box during combat will result in, "You won't be able to choose a reward during combat."

A player obtains a lamp from a genie after opening a random event gift.

When players have confirmed their selection a message in the chatbox says: Enjoy your gift. 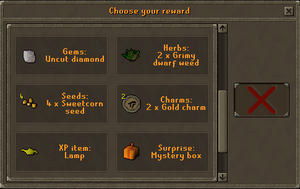 The screen when the box is opened for members. 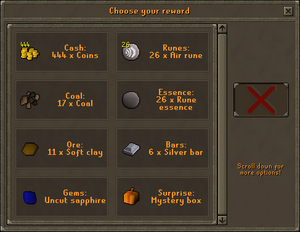 The screen when the box is opened for non-members.

Note: You may receive herbs that include types you cannot clean yet, or use in making a potion.