Count Yakula's Yak Track, also known as Yak Track, was an event which allowed players to earn rewards by completing tasks, which started on 25 November 2019 and ended on 5 January 2020.

It featured two prize tracks, free and premium, the latter of which gave a larger number of prizes. Players could unlock the premium track by having an active Premier Club membership (includes Premier Club members from the 2018-19 period[1]) or by buying a Premier Pass using two bonds. It is similar conceptually to RunePass.

Players gained progress in the prize tracks by completing various tasks, displayed in the event interface. Tasks had to be completed in the given order. Players kept the items they gathered or made.

A special Treasure Hunter promotion called Gone Yak Tracking ran for a while during the event.

Players could complete either task to progress to the next tier. Task requirements were based on the player's level in the task skill, as well as if they are free-to-play or pay-to-play. Free-to-play players only had the options of free-to-play skills as tasks, whilst members will have a mixture of free-to-play and members skills.

Players could skip tiers by using task skips. Everyone initially had two task skips, and more could be purchased with bonds via the store.

Despite the task wording saying 'and above', not all items that required a higher level than the one listed were eligible to complete the tasks. All eligible items could be found below in the requirements section.

Note that the following table uses requirements (both the amount, and item required) as based on a maxed player (except Slayer tasks). For non-maxed, and further item details, see the requirements section below.

Note that the following table uses requirements (both the amount, and item required) as based on a maxed player. For non-maxed, and further item details, see the requirements section below.

Protean items (does not include protean bars), and items that grant duplicates (e.g. dwarven toolbox items), count towards tasks.

Although task wording states 'and above', not all items that required a higher level than the item specified in the task were eligible for task completion (e.g. great white sharks did not count towards Fishing tasks - this could be toggled off via the game interface for the player's player-owned house). Additionally, despite the required items generally following a consistent pattern with multiple options, some tiers at certain levels only offered 1 item option to complete the tier (e.g. tier 50 at level 120 Dungeoneering only allows for Warped floors). Items which were eligible for each task and skill could be checked in the following table.

Slayer tasks had the same amount required for every player, as found in the tasks section above.

Items can be flatpacked or hotspot.

Remains which have been buried, scattered, or offered at an altar, all count towards Prayer tasks. 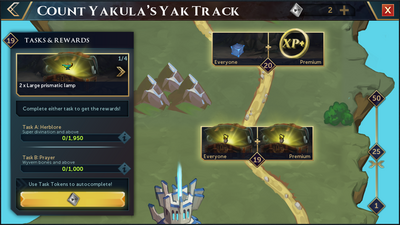 The interface for Yak Track.

For fastest course disregarding experience rates, use Bandos Agility Course. A lap can be finished in approximately 35 seconds.

Using the Prifddinas Agility course in Hefin, a single lap takes around 50 seconds. Turn the camera to look east, place the mouse cursor at a specific location to the left of the character, and then click in the same spot in order to climb every single obstacle in the course. It might require some adjustments to find the right spot. On windows, "Mouse keys" can be enabled to control the mouse with a keypad. Then press 5 on the number pad to click. Doing this removes the risk of moving the cursor and missing the exact spot.

Its also possible to do the Barbarian Outpost Agility Course or Gnome Stronghold Agility Course advanced courses. The combined need to do just over 250 laps means that you can acquire the Agile legs or Agile top a requirement for Fremennik achievements / Trimmed completionist cape. Lap times are very close to Bandos Agility Course.

Energies obtained from conversion of memories count towards task completion and can be done for faster tasks. The divine-o-matic also works, and it speeds up tasks as memories do not have to be converted or deposited.

Complexity 1 rush can be done for fast floors.

The task counts items collected from patches, not how many patches that the player chooses to "check health" on. Always have fully grown plants in all patches possible. A list can be found at here. Plant both in the Allotment/Flower/Herb patches list and the Herb-only patches list. Use a master farmer outfit to get more herbs from the patches. For more yield, treat patches with supercompost or ultracompost, have magic secateurs in the tool belt, drink juju farming potion and use greenfingers aura. Supreme growth potions can be used if seeds have not been planted in advance.

If catching sharks, make sure to tick off "Catching Great White Sharks" in the settings as they are not counted towards the tasks. Baron sharks from perfect juju fishing potions do not count either, so it is recommended to fish something else if drinking them.

The VIP skilling area area is likely faster and far less effort than catching sharks, despite the chance of also catching fish that don't count.

Catching fish from divine locations work towards these tasks. Fish from The Arc do not count for fishing tasks.

Using a pitch can let the player burn logs extremely fast. Use an action bar setup where a log is lit on one key and a Beast of Burden is withdrawn on another. Then use the attuned crystal teleport seed and teleport to the Trahaearn Clan district in Prifddinas. Create a line of fires from there, and teleport back.

The cheap alternative but slower method was using portable brazier.

Logs burnt using Book of Char did not count.

Additional ores gathered by having the relevant stone spirit in the inventory count towards the completion of the task.

Using the highest tier Ore box you have will reduce the amount of bank trips you need.

Coal can be mined extremely fast at the Living Rock Caverns from concentrated coal deposit. All players get coal for task 40. Use of an elite Mining outfit is recommended as it makes creatures in the caverns become passive. Alternatively an elite Fishing outfit can be used. To avoid banking, use a sign of the porter (optionally in a grace of the elves). To increase yield per rock, use coal stone spirit. Optionally use perfect juju mining potion as well to keep stamina up. At least Varrock armour 1, New Varrock achievements easy (to avoid wearing the Varrock armour), and medium (to double chance) will help as well.

The use of a Grace of the Elves acting as a sign of the porter will allow longer trips without having to bank. In addition if you are a premier club member, the sign of the porter boost from the Premier artefact will bank half of what you collect straight to the metal bank.

The bonecrusher counts for tasks that require bones to be buried. To save money, a player can therefore kill blue dragons in the Taverley Dungeon or similar. Players who use super antifire potions will not be hurt by steel dragons at all as they only use dragon fire at a distance. They can be found in Brimhaven Dungeon and Brimhaven Dungeon resource dungeon.

Auto sanctifier can be used to gain increased experience while burying the bones at a bank for faster task completion. Dragon rider amulet is another alternative for dragon bones, though it does not stack with auto sanctifier.

Another way to collect dragon bones is by killing Vindicta in the Heart of Gielinor. This boss commonly drops 150-250 noted dragon bones.

Offering bones at the Chaos Temple in Wilderness does count towards the progress.

With Legacy of Seergaze complete, a player can create blood runes with the wicked hood teleport. Bring a full inventory of pure essence and Runecrafting pouches, as well as a familiar like abyssal titan full of essence. Once in the altar, use the hood's "withdraw essence" option. Tirannwn quiver 3 obtained from the completion of Tirannwn hard achievements provides five free teleports to Death Altar per day.

Additional runes can be crafted in the Runespan with a complete Ethereal outfit.

Completing tasks from lower lever slayer master such as Turael or Spria are generally much faster than higher level ones. Note: If a player changes their task with Spria or Turael, their task count will be reset back to zero.

Slayer Challenges do not count.

To easily create many items, e.g. 50 orikalkum equipment, repeatedly right click to open the smithing interface, and select orikalkum armoured boots; the inventory can be filled with up to 28 boots at a time. Then click the anvil and smith them all in one sitting. Players can use Superheat Form with Grace of the elves and Smithing autoheater or Advanced smithing autoheater to keep high heat whilst being AFK.

Divine yew trees make these tasks extremely fast as between 250 and 295 can be collected from a single daily. Going to uncharted islands and cutting (Golden) bamboo is also faster and more afk than cutting yews or magic trees.

There were 50 tiers, and players could receive cosmetics and items for progressing through each. Ironman accounts could only receive cosmetic prizes. Experience boost rewards were not permanent and last only until the end of the event.[3]

If tasks were completed without the premier pass and the player later gains a premier pass, all of the previous premium rewards will automatically unlock.

Below are the total amount of rewards received from completing Count Yakula's Yak Track. The premium section contained the combined total for both free and premium rewards.