The Stronghold of Security is a dungeon for low-level combat training with rewards requiring answers to some security-related questions. It is located in the middle of the Barbarian Village and was the first major update open to free-to-play players since the upgrade to RuneScape 2. 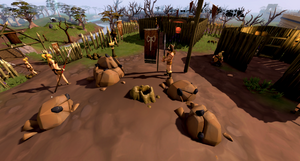 Entrance to the Stronghold of Security

The Doors are styled to match each level, as are their names:

The doors come in pairs similar to an airlock between areas. The door leading out of an area is passed through automatically, though it is possible to be hit while apparently having already passed through, which could lead to dying inside the "safe" zone between the doors. Each "airlock" is a two by two square, so to be safe, a player should walk to the next square after entering an airlock.

Entering the door into the airlock grants immediate passage. The passage leads to a series of chambers which contain monsters. The chamber should not be attempted by low level players unless appropriately equipped. At the end of each chamber lies a reward in a closed case.

At the start of each level is a portal granting quick access to players who have already negotiated the level or who have sufficient combat level to be allowed immediate passage. The last chamber includes the reward, an escape to the start of the level, and the entrance to the next level. The rewards are obtained after answering a security-related question and include coins, a choice of fighting boots or fancy boots, and one of the stronghold emotes—Flap, Stomp, Slap Head, and Idea.

There are four levels. Each level contains an entrance/exit point at the beginning and a portal to access the next level if re-entering after completing a level. The portal leads directly to the treasure room of the current level.

There are some general monsters plus others specific to the level. At the end of the level, there is a reward, typically coins and an emote, and exits to deeper levels or back toward the surface.

It used to be dangerous for low level player to claim rewards on high level floors. However, because all of the monster in the Stronghold are no longer aggressive, it is possible for players to claim all the rewards by running through the stronghold.

Claiming the Gift of Peace.

Claiming the Grain of Plenty.

Claiming the Box of Health.

Claiming the Cradle of Life.

A total of 10,000 coins are earned from all four levels, as well as the four emotes—Idea, Stomp, Flap, and Slap Head.

The skull sceptre can be obtained in four pieces from monster drops. It has the same combat stats as a magic staff but also has unlimited charges to teleport back to Barbarian Village or Gunnarsgrunn. Also when wearing Varrock armour 2 or higher, the drop rate of skull sceptre pieces is highly increased.

Only one piece can be found on each level. They are a fairly rare drop and can be obtained from minotaurs (right skull half) on the first level, flesh crawlers (bottom of sceptre) on the second, catablepon (top of sceptre) on the third, and ankous (left skull half) on the fourth. Some monsters that drop the pieces come in various levels. To make it, add the two skull pieces together, the two handle pieces together, and then the handle and the skull together.

The two styles, fancy boots or fighting boots, may be obtained, exchanged, or replaced if lost from the Cradle of Life at the end of the fourth level reachable by the portals and ladders once all levels are completed. They have small defensive bonuses and the difference between them is purely cosmetic. These boots are untradeable, and have a destroy option. Players may obtain both boots by selecting the option "I'll take both!" after searching the Cradle of Life.

Shade robes can be obtained by killing shades in the Sepulchre of Death. Shade robes are not transparent like ghostly robes and are untradeable. This was to replace the shade random event, where a shade would attack players who have

buried bones and would occasionally drop one of the two pieces of shade gear. Shade robes can be stored in the POH costume room in the costume box.

If the player uses the Orb of oculus in certain areas of the Stronghold, they can see several members' locations. These include the Dragon Forge, TzHaar City, and Dream World.