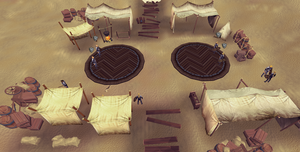 Heart of Gielinor: Encampment was a five-day community event that was released on 17 March 2016. In it, players helped Ajjat to prepare the entrance to the upcoming dungeon, the Heart of Gielinor, in an event similar to The Lost Sword. Players may train adventurers who wish to venture into The Heart or help create statues of the dungeon's participants. After the entrance is prepared on the fifth day, players use their Divination skills to clear the portal entrance to the dungeon.

The event involves different skills every day, including at least one combat skill and one non-combat skill. As with The Lost Sword event, players need golden or basic tools to participate in Heart of Gielinor: Encampment. 100 basic tools are received upon login each day, while golden tools can be won from Treasure Hunter. Packs of 30 or 100 tools can be purchased from Ajjat with 5,000 or 12,000 Loyalty Points each, respectively. A maximum of ten packs of each type can be bought with Loyalty Points.

During the preparation part of the event, players were given 100 basic tools upon login (stacked if the player missed several day(s)). After the 5th day, unused tools could be handed over to Ajjat for a fraction of the experience on skills that were used during said 5 days.

As the event progressed, players trained adventurers in combat, cleared the area near the entrance of debris and built statues representing the generals participating in the dungeon below. On the last day of preparations, statues were prepared and blessed. After all the preparations were complete, players began to clear the portal blocking the entrance to the dungeon. While clearing the portal, players will siphon part of it out for Divination experience. Training will be interrupted every 10 actions as players become overwhelmed by the power of the portal.

The experience gained varied with skill levels. The above table gives the experience values per action at level 99 when using basic tools. Five actions could be performed with one set of tools. Divination does not use tools; instead it stops at 10 actions and prompts the message: "The energy from the portal overwhelms you for a moment." 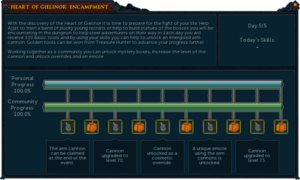 The progress of the event

Rewards, which are claimed from Ajjat, depend on both community and personal progress, and include the following:

This information has been compiled as part of the update history project. Some updates may not be included - see here for how to help out!
Retrieved from ‘https://runescape.wiki/w/Heart_of_Gielinor:_Encampment?oldid=33551274’
Categories:
Hidden categories: