From the RuneScape Wiki, the wiki for all things RuneScape
Jump to navigation Jump to search
This article is about the world event involving Tuska. For the minigame and holiday event initially billed as World Event 3, see Cabbage Facepunch Bonanza.
For the related Distraction & Diversion that became available after Tuska's fall, see Anima Islands.

Tuska Comes, first mentioned at RuneFest 2013 and expanded on at RuneFest 2014,[1] was the third world event involving four factions (Armadyl, The Godless, Saradomin, and Zamorak) banding together to try and kill the blind boar god Tuska, who was hurtling towards Gielinor in an attempt to devour it. Players were able to side with one of the four factions trying to kill her. Its original release date was the third week of May,[2] but was moved back to 1 June 2015.[3] The event spanned 30 days.

The aim was to use residual Anima Mundi to charge a weapon and stab Tuska in her weak-spot, weakening and destroying a barrier of Anima Mundi (similar to that of the Edicts of Guthix) which was preventing Tuska's destruction.

On 24 May at around 19:00 game time, this was teased in an unannounced phenomenon where the screen shook and people collapsed. A translucent image of Tuska's face was shown along with the message: You sense something is not right, as if this could be the beginning of the end.

Beginning on 1 June 2015 players could speak with representatives from each faction, (Scopulus for The Godless, Kamiee for Armadyl, Bree for Saradomin, and Moia for Zamorak) to join a faction and to access a reward shop.

Tuska adapted to players' actions as the event progressed. Contributions from each god faction were tracked; at the end of the event, the winner was determined by the side (Tuska or Gielinor) that had won the most "days". A third outcome was also a possibility, but never used.[4] Ultimately, the Godless won, and Tuska was slain by Vorago.

Scopulus remained on Tuska's corpse and was joined by Kara-Meir and Garlandia, while the other factions left. Also remaining, at the top of Tuska's spine, is a strange energy matrix, the World window, which grants access to Mazcab.

The HUD, as it appeared during the World event

Players could previously teleport from Gielinor to Tuska's back through a special option in the Home Teleport interface. There, they were able to play the Anima Islands activity. 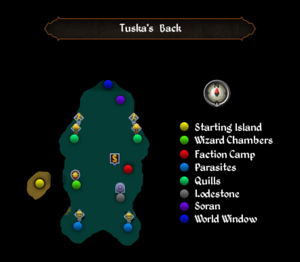 Tuska's back, while she was in space

During the World Event, Tuska was originally positioned facing north, the opposite of her current south-facing orientation.

The starting island and Wizard Chambers were to the west, with the bank and faction camp to the east. The representatives of the losing factions left after the conclusion of the world event and only Scopulus remained behind. Meteorite chunks could previously be taken to the world window to damage Tuska and earn experience in a skill of your choice.

Each day (resetting at 00:00 UTC) was treated as a new round. If 100% total damage was done to Tuska, the faction that dealt the most damage to Tuska won the day, otherwise Tuska won. Players made their way from island to island to reach the front of Tuska, where they had to stab her weak point with a Tuska spear, god-aligned to the faction the player chose. The islands in Tuska's orbit, remains of planets that she had devoured, contained remnants of Anima Mundi, which was used to charge the spear.[4] 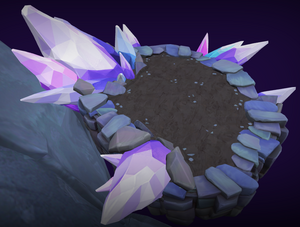 The starting island during the World Event

At the start of each hour, announced by timer, the event would begin. When it began, players could jump to the starting island, where players aligned with the same faction as one another would be grouped together. If players wished to do the event with friends or with people aligned to multiple factions, the Grouping System could be used. 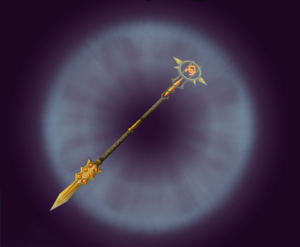 The spear being charged

On the islands, players took part in various minigames to gather the Anima Mundi to charge the spear. Players could use combat in the minigames, as well as non-combat skills including Agility, Construction, Divination, Dungeoneering, Farming, Firemaking, Herblore, Hunter, Mining, Prayer, and Woodcutting. Experience received scaled according to the player's levels.

When the four islands had been passed through, players were dropped from above onto one of Tuska's tusks and given Reward Currency equal to 10x the percentage the spear was charged (the limit for first stab was 1000 points, second and third stabs gave 250 points, and any stabs after that gave up to 50 points).[5] This limit would reset at the start of each day.

Depending on the player's alignment, they'd say the following phrases:

A player balancing on a spine

At 0:20 of each hour, the event became unavailable for 40 minutes until the start of a new hour (i.e. 0:00, 1:00, etc.). During this time, other skilling methods became unlocked for players to obtain Tuska fragments, an alternate source of the Reward Currency which could be used on Wizard Chambers for 5 Reward Currency each. From 4 to 8 June players also received 1 Astromancer credit for every fragment collected.

Skilling nodes were previously located on Tuska's sides, green quills which could be cut down for Woodcutting experience, and blue spines that could be balanced on for Agility experience. Players gained 10x experience if they were balancing on a stump that had an electrical current around it.

Parasites were killable on Tuska's southern end for Slayer experience and uncommonly dropped the Tuska fragments.

A maximum of 80 Tuska fragments could be gained each day by skilling and killing on Tuska's back. Skilling and killing on Tuska's back was limited to 80 minutes per day, which could be reset by stabbing Tuska another time. Red-text warnings appeared in chat after every 25% (every 20 minutes) of the player's allotted skilling/killing time that had passed.[1]

These activities are not available anymore since the World Event ended.

For Tuska to be defeated by another faction on any given day, Tuska would need a score of 0.0%.

Rewards include a tiered emote called Tuska's Fury, cosmetic overrides of the god-aligned spears, abilities from the previous world events and the new Tuska's Wrath ability, the Tuska storm teleport animation override, and Warpriest of Tuska armour, a type of warpriest armour that adds a small chance to deal a maximum hit against enemies in combat, including bosses, in a manner similar to Biting. The prices for these rewards have been increased since the World Event ended. During the world event, the previous sets of warpriest armour were also available.

After Tuska's defeat at the hands of the various god factions, with a decisive Godless victory, Vorago killed Tuska. Tuska's body fell into the waters directly west of the Bandit Camp and the Bedabin Camp in the Kharidian Desert. Tuska's body can still be accessed; the Anima Islands activity available during the world event has become a permanently available Distraction & Diversion.

Many of the rewards that could be unlocked during the world event are still available, albeit at a higher price with a greater quantity of Reward Currency required. Full Warpriest of Tuska armour, abilities unlocked in previous world events (Sacrifice, Devotion, Transfigure, and Tuska's Wrath), and the Tuska storm teleport animation override still available in the rewards shop for the Anima Islands activity. However, four titles that could previously be unlocked during the World Event are no longer available.