From the RuneScape Wiki, the wiki for all things RuneScape
Jump to navigation Jump to search
Not to be confused with Stronghold of Security.

The Stronghold of Player Safety is a dungeon under the Misthalin Training Centre of Excellence. It can be found exactly north of Barbarian Village and south of Edgeville.

The Stronghold was originally a massive prison that housed some of Misthalin's worst criminals, such as the gang members of Varrock or criminals operating over the Wilderness border. It was built some time in the late Fourth or early Fifth Age.

The massive prison soon fell into disuse, its guards wandering off and tunnelling creatures causing problems. For years it remained abandoned, a strain of massive cockroaches making their home in the moist tunnels.

Recently a smaller prison was built in the tunnels above the ruins, and an educational centre built above it. The old prison has been rediscovered and opened to adventurers that look to explore its ancient ruins. 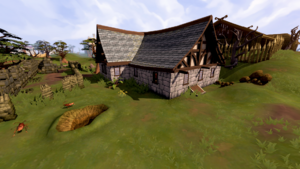 The two entrances to the stronghold

At ground level, there are three entrances.

Note that the world map would often show you at a wrong level of the dungeon. Therefore, it is advisable to enlarge your minimap and reference this article for locations.

When entered through the jail entrance, you arrive at the south end of a fairly small area with 8 jail cells. There is a staircase that would take you up into the Training Centre in the northeast corner. The second jail cell to the left - the only one that is empty and you can enter - contains a poster that you can pull back, entering the main dungeon.

You will arrive at the southwest corner of the middle level. It can be divided into east and west halves. In the centre of the west half are stairs that will take you down to the bottom level. In the north end of the east half is a staircase that will take you up to the upper level (while the halves look connected to the north, you cannot get past there; you must enter the east half via the southern corridor). That room with the staircase contains a jail door that leads to the secure sector, but it is locked until you pull the lever in the upper level. 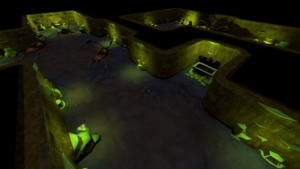 The lower level also contains a jail door that leads to the secure sector, but it is locked until you pull the lever in the upper level.

In the north chamber, you can find an old lever on the west side, which when pulled unlocks the aforementioned jail doors; on the east side is a rope that you can climb up, bringing you to the surface near the crevice. Once you have done this, the crevice can be used as a shortcut back to the same chamber.

In the centre of the secure sector is a treasure chest. 10,000 coins, 2 antique lamps that will grant 500 experience each, and safety gloves are received when opened. The Safety First emote is also unlocked.

Almost all the monsters in the Stronghold are not aggressive. The Stronghold of Player Safety may provide a good place for low level combat training, especially for free-to-play players. 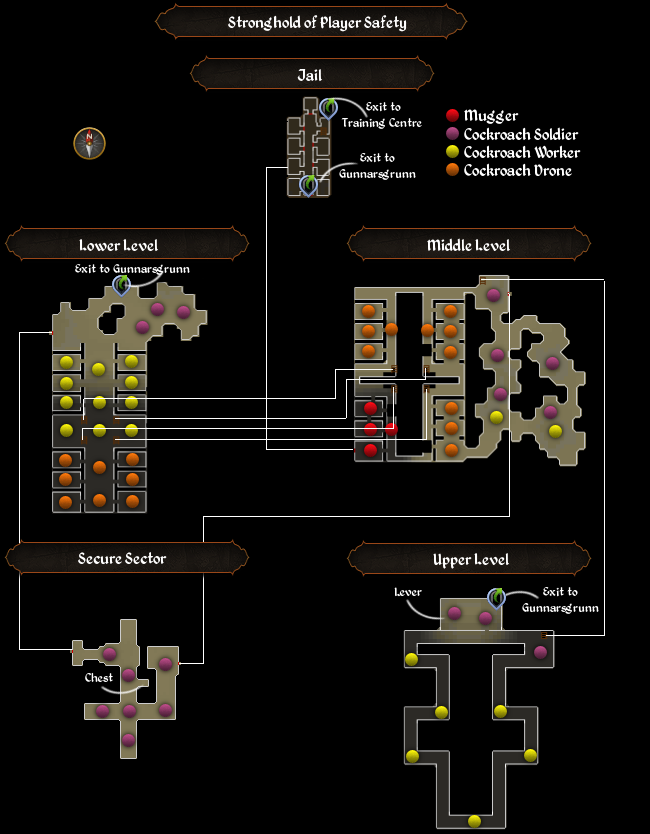 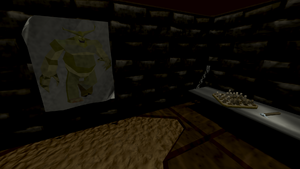 A "The Shawshank Redemption" reference. 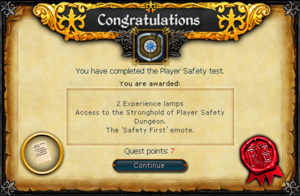