From the RuneScape Wiki, the wiki for all things RuneScape
(Redirected from Lumbridge crater)
Jump to: navigation, search

The Lumbridge Crater is located immediately west of Lumbridge. It was the site of the Battle of Lumbridge, where Zamorak returned to Gielinor and clashed with Saradomin over the power of Guthix, contained in the cave system that lies below Lumbridge and Lumbridge Swamp.

The crater, full of divine energy. 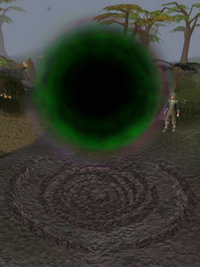 The portal that appeared before the creation of the crater.

A few weeks before Zamorak's arrival, a portal appeared in the woods between Lumbridge and Draynor Village, just south of an abandoned and derelict house. Various bystanders gathered to gawk at the portal as it grew in size.

When Zamorak stepped through the portal, he immediately noticed a glowing crack in the ground. From this crack radiated power, remnants of godly energy left by the death of Guthix. He started blasting the ground with magic, sending the civilians fleeing in terror and attracting the attention of Saradomin, who had returned to Gielinor earlier and in a more subtle fashion.

The two gods sent opposing beams of divine magical power at each other, which collided in mid-air. This occurred directly over a well of Guthix's power, the ground above which caved in as the gods battled over it. The energy involved in the contest soon overloaded and created a blastwave that tore up the ground, destroying trees, buildings and even the back wall of Lumbridge Castle. 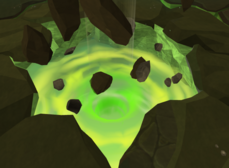 The maelstrom formed at the centre of the crater

Saradomin and Zamorak stood at opposite ends of the crater, continuously battling with divine magic. Their followers set up camp around their feet, and encouraged adventurers to join their cause, to fight in the Battle of Lumbridge.

The power underneath the crater was released, and could be collected in the form of divine tears by those faithful to either of the gods, using the Mining, Woodcutting and Fishing skills. Adventurers also could choose to strike at the warriors of the opposing god, who dropped tears, pieces of sacred metal and parts of divine weapons to make weapon overrides.

As the end of the Battle of Lumbridge came with Saradomin as the victor, constructs from the battle were left behind and buildings were in ruins. Players helped Foreman George and his team rebuild the town of Lumbridge; players gathered resources from camps left behind, and rubble from the back wall of Lumbridge Castle. These were used to rebuild the buildings devastated in the battle. Towards the completion of the buildings, a memorial fountain was built just outside Hank's shop, in recognition of all the efforts made to restore Lumbridge.

Angered by his loss in the Battle of Lumbridge, Zamorak sent a demon "San'tar Klaws" to kidnap Santa Claus and ruin Christmas. Players could gain 'naughty' or 'nice' points on Santa's list by partaking in numerous activities around the snow-covered crater. When 750 of either points were collected, San'tar Klaws would free Santa from his cage.

The former Saradomin camp subsided, and ruins from an old building underground were exposed. A battle ensued between gods Marimbo and Brassica Prime, based either side of the ruin, and Holstein, representative of the Godless, also arrived. Players could join any one of these three factions, and contribute by competing in the Cabbage Facepunch Bonanza minigame underground, involving monkeys and cabbages.

Players could take part in a choice of four different activities, including helping Santa Claus deliver presents to NPCs for festive paper to build a giant cracker, hunting tinsel snakes, helping take down a snowman boss called Snowverload, and going snowboarding. In addition to this, a number of bosses wore festive Santa hats.

During June 2015 the crater turned into a beach, organised by Battle of Lumbridge survivor Reyna. Before the party started, players needed to help her by bringing buckets of sand to the crater. The party itself features Distractions and Diversions portals, and activities (such as coconut shy, barbecuing, and sandcastle building), which grant experience. Clawdia also features as a boss that spawns every hour.

From 5 November 2015 to 9 November 2015, Guido Fawkes hosted a bonfire in the crater. Sera and Emmett performed their circus acts and Carlos the Chef could also be found there.

The crater received a rework on 6 March 2017. The crater and the Lumbridge swamp were reclaimed by nature with the help of some druid's[1] anima magic, as flora and fauna took over the crater. This reintroduced several animals (notably rabbits), several trees, a pool in the centre, and a bank chest to the far east side of the crater.

On 18 April 2017, Menowin appeared in the crater, asking the players to aid him in building the Helter Skelter, the centerpiece of the soon-to-come Spring Fayre. During the week players could help Menowin using a set of 2 skills each day. On 24 April 2017 the build was completed and the Spring Fayre was opened. Functionally similar to previous events like the Summer Beach Party, players could engage in different activities with XP and item rewards.

On 17 July 2017, Reyna reappeared next to the crater, asking to players to help her rebuild the beach from previous years. To do this she required players to hand in beach sand to her.

Players could also take 50 buckets of beach sand from the pile of sand next to her, which they then had to deliver to different parts of the crater whilst avoiding sandnados and quicksand.

From 31 July 2017 to 4 September 2017, the Summer Beach party returned to the Lumbridge Crater. Players could complete a treasure map every day to receive a free item. Players could also buy new cosmetic overrides, tokens, pets, and more, including items from previous years.

From 9 October 2017 to 6 November 2017, NovtumberFest was held in the Crater. Players could participate in many different activities, including a bar crawl, for experience. There were also several rewards, including a new title and tokens that unlocked pets and cosmetic overrides.

From 29 July 2019 to 5 August 2019, the Summer Skill Off was held in the Crater. Players could collect Skill Off tokens from gaining experience anywhere in Gielinor, and they could use these tokens to vote for skilling stations present in the Crater. Every day, the station with the least amount of tokens would be eliminated, while the winning stations would receive an increased experience boost. Players could still gain experience at eliminated stations, but they could no longer vote for them. Prizes included the Blightreaver (2H) and the Snack yak pet.

From 27 January 2020 to 2 February 2020, Mini Morn hosted the Winter Chill Off in the Crater. Similar to the Summer Skill Off, players could earn Chill Off tokens by gaining experience and use these tokens to cote for their favourite skilling stations, with the losing station being eliminated every day. Players could win the Blightreaver Staff and Mini Morn pet, as well as the rewards from the Summer Skill Off.