From the RuneScape Wiki, the wiki for all things RuneScape
< RuneMetrics(Redirected from Adventurer's Log)
Jump to navigation Jump to search 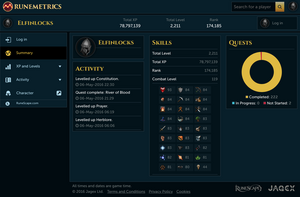 The Adventurer's Log was a members-only feature of the RuneScape website. It contained many functions that a player might find useful, including recent activity, quests recently completed, skills recently trained, and notable drops recently obtained. It was replaced by RuneMetrics on 11 May 2016 for the English website version.

It was previously accessed through the Community tab of the RuneScape main page and through the HiScores section. Any member player's log could be accessed by typing in the player's name if their privacy setting was set to 'Public'; if set to 'Friends Only', then the friend had to log in. If set to 'Private', the player had to be logged in to access their own log.

I have completed a Customer Support treasure trail. I got a <item> out of it.

I have visited my Clan Citadel this week.

I have maintained Fealty rank <number> with my clan.

After defeating Telos, I looted a <item>.

After killing a Rune dragon, it dropped a Kethsi ring.

While skilling, I found <Skilling pet>, the <Skill> pet.

After opening a Dragonkin lamp, I unlocked Effy the effigy pet.

Item drops from high-level monsters such as God Wars dungeon bosses, Corporeal Beast, or from Slayer monsters such as abyssal demons and dark beasts also get displayed within the Adventurer's Log.

I have solved one of Gielinor's greatest mysteries.

I have completed a tetracompass.

Individual players may change who can see their log by logging into their account on the main Runescape page. Scroll down to the RuneMetrics Profile tab and tick "friends only" & then click the change settings button to save it. The available options are:

Players who have been banned, or who are not currently members, will not show on any log.

This information has been compiled as part of the update history project. Some updates may not be included - see here for how to help out!
Retrieved from ‘https://runescape.wiki/w/RuneMetrics/Adventurer%27s_Log?oldid=35751949’
Categories:
Hidden category: