The golden scythe is a fun weapon that was given to a select amount of players who attended RuneFest 2011. The scythe was awarded to the first 25 people who successfully completed the Deathcon II event before others, making it one of the rarest items found in-game.[1] To win the competition, players had to correctly decode the message 'Death might just reward your quick puzzling with exclusive benefits.' 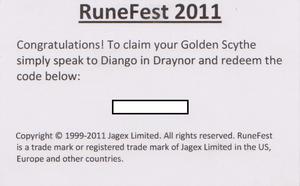 A card used to obtain the Golden Scythe. 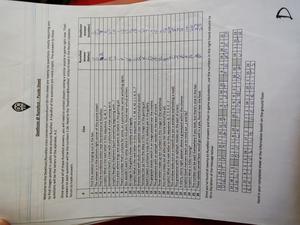 The puzzle sheet players were given to obtain the golden scythe.

The general community wasn't pleased with Jagex' method of releasing the golden scythe. A puzzle pamphlet was handed out to a limited group of attendees who guested the first RuneFest main stage session, where Death entered the stage and announced the puzzle and the pamphlet hidden under the audience chairs. At this point, a large number of attendees were still attempting to enter the venue, with large queues outside the building. At the same time, the guests who chose to not attend the first session were never made aware of the puzzle.

There were also displeased attendees who felt a physical race to obtain such a rare item was unfair on parents with children, disabled and elderly attendees who usually would have trouble to race for the solution online with the young adults. At the same time did groups collaborate on collecting the answers, sharing them between each other gaining an advantage over single attendees. This caused the majority of the 25 golden scythes to be awarded amongst members of the same community.

Players were also sceptical of the origin of the scythe, as Jagex was nominated for the Golden Joystick Awards in 2011 held the weekend prior to RuneFest, which they lost due to the ongoing battle against botting in the game at the time. After their victory in the same category in 2010, every player was given a golden cracker containing a golden hammer. With the golden scythe added two weeks prior to the event and one week prior to the awards, it was simple to believe the golden scythe was a last minute addition to RuneFest after the Golden Joystick Awards loss, originally intended to be an award for every player should Jagex have won. This theory was however later debunked by Mod Mat K and its developer Mod Rowley; saying the golden scythe was simply a Halloween-themed item, poorly handed out during the event.

A riot started in-game from players who didn't attend the event, rallying for Jagex to release the scythe or give players in-game a chance to obtain it. Also players during the event felt cheated, having not been aware of the existence of such a puzzle or upset they weren't made aware of the limited numbers available. During the aftermath of RuneFest, there was engagement on the RuneScape forums to track down and list the owners of the golden scythes. Several owners decided not to publicly come out as golden scythe holders in fear of account hijacking. Jagex also made moves to protect the accounts, listing them on their servers in case the account should ever switch owner through hijacking or real world trading.