Ashdale is a peaceful cliff-top island village found south of the Feldip Hills and west of Ape Atoll. The village was founded over 400 years ago, and is where people from all across Gielinor go to have a more peaceful life, as nothing very interesting happened there until recently.

Gudrik the dwarf, found in Port Sarim, may take people there and teach them the basics of RuneScape. There, they will also fight off an attack by Morwenna the Cruel. It is the setting of the quest A Shadow over Ashdale and the former location of the game's tutorial before Tutorial Island was reintroduced. 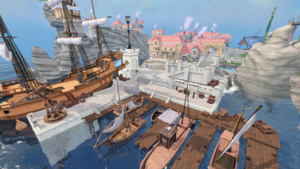 A view of Ashdale from the docks.

Ashdale is accessed from a dock found to the south of the island, which, unlike the rest of the island, is at sea level. The dock is home to many boats, most of which are relatively small, and a beacon to guide them past the outlying rocks to the island.

The rest of the island can be accessed by climbing stairs from the dock onto the cliffs that the village farms and more are situated on. Just at the top of the steps, a bridge can be found to the east, supported by two giant statues. The bridge leads to a small floating island, upon which the village's church to Saradomin can be found. Although it is a church, no altar to restore Prayer points can be found inside. 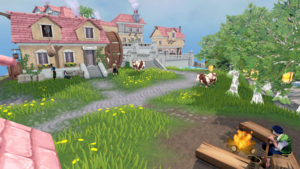 North of the steps, the village proper can be found. The east side of the village is home to many features, including a quarry home to copper and tin rocks, and a furnace with two anvils to smith on. Another dock and boat can also be found next to the mine, which is overseen by the quarry overseer. The east is also home to what appears to be a statue of Saint Elspeth and a small market. An entrance to the sewers can be found to the south-west behind one of the houses, although they can only be accessed during the A Shadow over Ashdale quest. 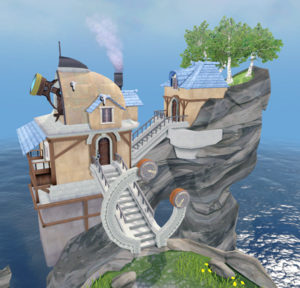 Ogden Plainview's house, which gives access to the Ashdale Caves

Further west is home to the farm, with Magda the seer's tower found on the path there. The farm is home to numerous cows and a cow-powered windmill, much like the one in the fairy kingdom of Zanaris. A storm drain south of the farm provides another entrance to the sewers, although like the other entrance, it can only be accessed during A Shadow over Ashdale. A small campfire can be found to the north of the farm, at which Digory Popplewell and Ned Swarbrick can be found. The fire, much like others in Gielinor, can be used to cook fish and other raw food.

A minnow pond can be found just south of the farm, where raw minnows can be fished using an ordinary fishing rod and some fishing bait. Another market can be found south of the pond, which has a statue of a sailor nearby, which a seagull occasionally perches atop. Further south, is a house which has a telescope looking out through the roof, and supported by cliffs which have some interesting drawings on them. This house was built by the Fourth Age architect Ogden Plainview, and can only be accessed during the A Shadow over Ashdale quest. During the quest, a staircase is discovered inside, which leads to the enormous Ashdale Caves.

A bank can be accessed in the Ashdale Caves by using the Dead man's chest (scenery), which also doubles as a way to replay the Agoroth boss fight and rewatch cutscenes from A Shadow over Ashdale.

Ashdale was the location of the RuneScape tutorial between 26 November 2013 and 2 September 2019. New players would find themselves on Ashdale automatically after they created their account, whilst more experienced players could access the island by speaking to Gudrik who was located in Taverley, just south-west of the bank, prior to the tutorial's complete removal.

If a player wanted to try out the new tutorial, you were required to bank all of their items before they could travel to Ashdale.

After nearly five years, the tutorial was replaced by Tutorial Island on 14 May 2018, following A/B testing. The tutorial was then completely removed on 2 September 2019 with the September Mobile Update, with all accounts still on the island being teleported to Burthorpe lodestone. The update aimed to clean up the starting areas of Burthorpe and Taverley to both declutter the areas and make for a more newbie-friendly starting experience.

These songs are unlocked automatically and played during the tutorial, but they're not listed on the music player.