From the RuneScape Wiki, the wiki for all things RuneScape
Jump to navigation Jump to search
The Old School RuneScape Wiki also has an article on: osrsw:Lumbridge General Store

The Lumbridge General Store is a general store run by a shopkeeper. It is located north of the Lumbridge Castle.

The general store used to be located more to the north, but this was changed in the Personalised Shops update, because Macroers often sell their logs after cutting trees, because of it being near their training spot, the forest.

With the release of the Personalised Shops update, this general store offers hammers, tinderboxes and bronze daggers as free samples once in a period of time, before the free samples restock, though trying to sell a sample back to the shop will result in the sample being replaced and no money gained. 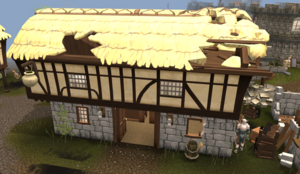 The damaged general store, a result of the Battle of Lumbridge.

The general store shop was damaged during the Battle of Lumbridge when Saradomin and Zamorak returned to Gielinor at the start of the Sixth Age.

The store was rebuilt by Foreman George, his crew of builders, and a bunch of adventurers as part of the Lumbridge Rebuildathon.

This information has been compiled as part of the update history project. Some updates may not be included - see here for how to help out!
Retrieved from ‘https://runescape.wiki/w/Lumbridge_General_Store?oldid=35684630’
Categories:
Hidden categories: