Hank is the owner of Lumbridge Fishing Supplies, a Fishing shop found in Lumbridge. His store is next to the Lumbridge Market. He sells fishing equipment that can be used locally. 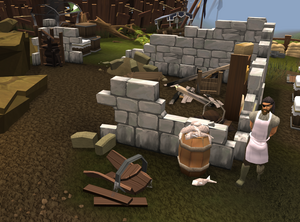 His shop was damaged greatly during the Battle of Lumbridge when Saradomin and Zamorak returned to Gielinor at the start of the Sixth Age. He fled his house when he heard a large rumbling, and witnessed his neighbour, Explorer Jack, fleeing from his own house, which then collapsed. Hank then helped Jack to his feet, and his shop soon met the same fate as Jack's house.

Hank considered himself lucky to have survived, and continued to sell fishing supplies that he had obtained from the wreckage. His shop was quickly rebuilt by Foreman George, his crew of builders, and a bunch of adventurers as part of the Lumbridge Rebuildathon, although Hank has yet to restock much of his inventory.