From the RuneScape Wiki, the wiki for all things RuneScape
Jump to: navigation, search
This article is about the competition. For other uses, see Golden gnome (disambiguation). 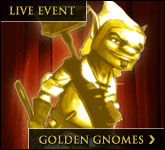 In the first 2 events, Party Pete hosted the award ceremonies, and a selection of well known Jagex Moderators including Mark Gerhard and Paul Gower. In 2013, it was hosted by Mod Mark and Mod Paul M. In 2015, it was hosted by Mod Balance. In 2016, 2017 and 2018, several JMods hosted the event announcing the categories and winners. The ceremony will take place the night before RuneFest in 2019.

Players voted on nominations and a poll on who the winner should be. The categories and winners were:

Players voted on nominations but an internal panel at Jagex determined who should win the award. The categories and winners were:

Jagex moderators voted and chose the 2017 winners. The categories and winners were:

Again, the majority of the award winners were picked by JMods, and the audience also picked the winners of the cosplay categories. The categories and winners for the 2015 Golden Gnomes were:

The majority of the award winners were picked by JMods, with three of the awards given for activities held during the day, and the audience picking the winners of the cosplay categories.

A few new categories were introduced this year for live-streaming, and the Community Champion.

Former CEO of Jagex Mod MMG was also given a special Golden Gnome Award for his contributions to the game over the years and Mod Campbell was given one for eating a whole chocolate cake with his hands tied behind his back.

For the 2010 awards, entrants had a choice of 3 styles of video entries, which were Machinima, Live action or Animation, and for each of the styles, they could choose either the short story or RSMV (RuneScape Music Video) categories. For each of the categories, 2 entries were selected as finalists. The winners were as followed:

An In-game Golden Gnome pet, named afeter the respective category won and a Golden gnome hat. Along with some extra prizes: