From the RuneScape Wiki, the wiki for all things RuneScape
Jump to: navigation, search
The Old School RuneScape Wiki also has an article on: osrsw:V
VVariesVariesSee article? (edit)

V (true name unknown, but has gone by a variety of names) was a Fremennik seer who discovered the Stone of Jas and the art of Runecrafting in the First or Second Age, and thereafter founded the Moon Clan.[1][2] Some time after this, he ascended to godhood via slaying "at least one evil god". Though this is speculation on the part of the Moon Clan, it fits with his alignment and has previously been demonstrated possible by Guthix and Zamorak for a mortal to ascend by harnessing an elder artefact against a god. In this case, V ascended because of the Stone of Jas.

He is mentioned in The Basics of Magics, appears in a flashback during While Guthix Sleeps, is briefly mentioned by Sliske after Fate of the Gods, and plays a prominent role in the Hero's Welcome quest, in which he is killed by the Dragonkin.

V was born stunted and weak,[4] noticeably shorter than most Fremennik. Eventually he became a seer, and is said to have used his gifts to guide and teach the rest of his people.[5] One day, likely during the first or second age, he stumbled on the Stone of Jas in the Lunar Isle mine. Upon touching the stone, V was endowed with godlike power, albeit not enough to ascend,[6] and grew to normal height. The stone was then "instantly removed by those powers who walk a higher astral path", leaving behind what would later be dubbed rune essence.[7]

According to the Fremennik's songs and sagas, shortly after touching the stone, V returned to his people with a warning: he had spotted a giant basilisk on the shore that was nearing their encampment. Being nomadic at the time, many of the fremennik wished to leave, but V rallied the people and mustered a force to fight it. They polished their shields so that the basilisk's deadly gaze would be turned against it, and when it retched in pain from its own reflection, V dealt the killing blow with his halberd. The basilisks offspring were then herded into a nearby cave. This was considered V's first act of true heroism and the Fremennik later wrote a ballad about it called the Ballad of the Basilisk. [8]

Since then, V grew to become the Fremennik's greatest hero.

Although he never found the Stone of Jas again, touching it had unlocked something in V's mind.[7] V soon discovered that the rocks where the stone was found had become the rune essence, and that he could change them into "the elements of the universe itself" by focusing his mind on them. He and some other Fremennik then went and created a large number of altars at places of power around the world, starting with the Astral Altar. These altars could be used to create runes, which were previously only available in the limited quantities that Guthix gave out. With these runestones, V taught his people simple magics of air and water - things that would help them in their nomadic lifestyle. At some point, V founded the Moon Clan. He managed to maintain the peace between them and the rest of the Fremennik for as long as he was on Gielinor.

Ascending to godhood and the The God Wars[edit | edit source]

At some point, V fully ascended to godhood, which the Moon Clan posit could be due to slaying an evil god.

As a god, V defended the Fremennik through the outbreak of the God Wars. Although he was not nearly as powerful as the other gods, nor were the Fremennik as numerous as their followers, his presence on the battlefield inspired them to fight harder than ever before. This made the other gods eventually give up trying to conquer them. When the God Wars came to the end and Guthix created his edicts, V asked Guthix to stay a little longer, so that he could say goodbye to his people. Because he had not been a conqueror like the other gods, Guthix acquiesced.[9] Inspired by Marimbo, V held a massive goodbye party dedicated to the feats of heroism he would accomplish away from home,[10] after which he left Gielinor willingly.

In the absence of V, many Fremennik began to disagree on the subject of runecrafting. Some Fremennik believed that since runes were a gift from the gods, crafting them was blasphemy, while others believed that they should craft runes and use magic to better themselves. This eventually caused a split between the two factions, with the Moon Clan going to Lunar Isle after the other Fremennik turned violent. V, although far away from Gielinor, saw his people turn on themselves and wept.[11] In the 5th age, the Fremennik destroyed the entrances to the rune altars, rendering the Moon Clan unable to runecraft, but their isolation on Lunar Isle and continued practice of magic eventually led to the Moon Clan surpassing the need to use runes to practice magic.[12]

Removed from Gielinor, V travelled the universe. He never settled down in one place for long, fearing becoming a tyrant like the other gods, and instead hopped from plane to plane, performing feats of heroism or inspiring others to be heroes themselves. He saw many worlds touched by the gods, some adequate, some oppressive, and some ruined by the likes of Bandos, Tuska, the Queen of Ashes, and Xau-Tak. He also met others like him, around half a dozen "hero-gods" who upon achieving godhood had used their powers to become champions or heroes.

V returned to Gielinor in the Sixth Age as part of the Hero's Welcome quest. In this quest he is welcomed in Rellekka by the Fremenniks and their brethren from the Moon Clan after some help from the player. While he arrives he wants to give oxen meat to the people but something goes wrong and strange, live meat appears instead. After this he quickly leaves out of embarrassment, but before he does he asks Alfrick the Planner if he can bring the player to his island after the feast. The player complies and talks with him in a cave on the island and helps him regain some strength by finding duplicates of various objects on the island. Despite this, his strength continues to leak and then the Dragonkin attack him. During this attack Sakirth uses the Mirror on the player, and V pushes the player out of the way to save them, and his remaining energy is transferred to Tarshak, killing V. 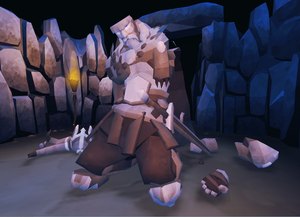 His corpse is left and when the player returns to the cave later on during the quest, there will be an altar dedicated to him in the room where his belongings were found earlier. After the quest his emissary, Hannu, Emissary of V, will also be there.

According to Alfrick the Planner, after his death he reports a large amount of visitors coming to the shrine to V, mainly members of the Godless and goblins.[13] His legacy continues even after death as the goblins seem to be awed by his values.[14]

V's true name is unknown, as V is merely a childhood nickname and what he preferred to be called. According to V, he went by a variety of names during his life. When he appears in While Guthix Sleeps, his name differs from player to player, from a set list. He is referred to as V------ in the Moonclan manual.

Below is a list of the names he may appear with in While Guthix Sleeps.

Transcripts V is the author or co-author of: 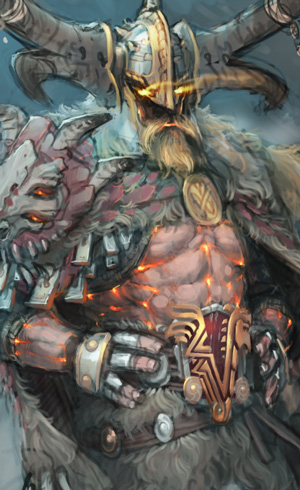