From the RuneScape Wiki, the wiki for all things RuneScape
Jump to navigation Jump to search
The Old School RuneScape Wiki also has an article on: osrsw:King Vargas
King Vargas? (edit)? (edit) 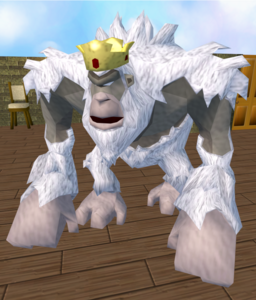 King Vargas is the king of the island of Miscellania. He was turned into a yeti, which made him unsuitable to rule as king, and therefore he attempted to find a regent. The player then rules in his stead as regent after completing the Throne of Miscellania quest.

He seems to be possessive of his land, and without the player knowing it, he seems to try to take back his land. He also occasionally makes decisions for the player when they are not there.

King Vargas was the ruler of Miscellania, having a small family - his unnamed wife, along with Prince Brand and Princess Astrid. He was popular with his subjects, working alongside them. Due to the small size of Miscellania, he also authorized the construction of the Miscellanian underground, hiring several dwarves to help expand the caverns underneath the castle.

Following a dispute with the Queen Sigrid of the Kingdom of Etceteria, Vargas declared war, although the small population of both sides meant that it was nothing more than trading insults.

Vargas was quite the adventurer, having gone on numerous trips with his Fremennik friends. In one of these adventures, they encountered a Gnoeals, which spat at him and fellow friend Nial Swiftfling. Nial was hit by the brunt of the spit, instantly turning him into an aggressive yeti, while Vargas was hit by a lesser dose. This slowly transformed him into a yeti as time passed, but he was able to retain his humanity.

The following takes place during Throne of Miscellania.

Vargas' huge size meant that he could no longer rule Miscellania properly, though he could not find a suitable successor; by Miscellanian tradition, only those related to the family could succeed him, but he felt that his children were not ready to rule yet. In the year 169 of the Fifth Age, a Fremennik adventurer had an audience with Vargas, who agreed to abdicate if they could prove themselves to be a worthy diplomat, believing they were capable of fighting. The adventurer managed to broker a peace with Queen Sigrid, who drafted a treaty which required his signature; as Vargas was too large to use a regular pen, they had a local smith create a giant nib for him to use instead.

Vargas then told the adventurer that because they weren't royalty, they would have to convince his son or daughter to marry them, and gain the support of the population. Once they did those, Vargas then abdicated the throne in a brief ceremony, entrusting the adventurer as the ruler of his kingdom.

Early in the new Regent's rule, Vargas soon learned from his people that their supplies were taken, and the perpetrators were none other than Etceterian soldiers. Without investigating further, he immediately declared war on Etceteria; Queen Sigrid soon heard from her subjects that their supplies were taken from Miscellanian soldiers, and subsequently declared war on Miscellania too. He had originally wanted to go back to adventuring, but the doors had not been enlarged to allow him to leave.

The Regent soon investigated on Vargas's behalf and learned that Etceterian soldiers demanded a tithe. Vargas was surprised that Sigrid had somehow amassed an army and sent them to her to learn the truth. Sigrid in turn tasked them to investigate her people, who told them that a Miscellanian army had arrived to demand tithes. As both kingdoms did not have the population to amass an army, the Regent returned to Vargas, who believed that they must have come from the outside. The sailor who brought them to the island told them that he had brought five kids from Rellekka who claimed they were visiting relatives in the dungeon. Following on this lead, Vargas had forgotten to tell them about the underground system, advising them to tackle any dangers there may be inside, and also gave them a scroll issuing them clearance as the guard on duty was a recent hire.

The Regent soon discovered the missing goods and the perpetrators behind them; the arrivals from Rellekka, who stole the goods from both kingdoms after failing their trials. They intended to give them back so that they could be recognised as diplomats by their family, but this plan went awry when a massive sea snake terrified them. The Regent dispatched of the monster and recovered the missing items. Vargas learned the perpetrators were the arrivals from Rellekka, having been warned of the Council by them, remarking that they must have been incredibly useless if they couldn't pass such simple trials. He asked them if they had the stolen goods with them, but the Regent told him that they couldn't carry all of them, so Vargas had his people collect the items shortly afterwards. The Regent also handed him a letter from Sigrid, who wished to learn more about him. Vargas thanked the Regent for solving the problem, and told them that the Etceterians were also willing to work for them.

The transformation from Yeti to human

Manni the Reveller asked the adventurer, who had been indoctrinated into the Fremmnik tribe, to help arrange a birthday party for Brundt the Chieftain. He required them to bring Mawnis Burowgar and Vargas, as they were Brundt's old friends. Upon attempting to invite Mawnis however, he told them that he would not go, and told them to speak with Vargas.

They went to Vargas and invited them to Brundt's birthday party, which he immediately rejected, blaming him for causing him to be in his current state, and demanded that Brundt apologise first. The Regent returned to Manni and learned the whole story from Brundt; the three were good friends, and decided to go on an adventure in year 154 of the Fifth Age. Asleif Hamalsdotter and Nial also accompanied them, and they soon found themselves outside the Fishing Guild after being defeated, though he could not recall the events leading up to it. They had gone to search for a tablet, which had been missing, and their animosity came from it.

Vargas soon told them an additional part of the story, though he did not remember Asleif attempting to heal him in the process.

With the map filled in by the three men, the Regent soon discovered the cave, put Nial out of his torment and found a mysterious herb bag dropped by Asleif. Vargas was surprised to learn that Asleif had died sometime after their adventure by a man in a bear suit, but was eager to be cured. The Regent created a Yeti curse cure with Asleif's help and gave it to Vargas, who immediately gulped it down and was delighted to be a human again, now intending to join the feast and return to adventuring.

Almost immediately, Vargas returned to adventuring, searching for treasure underneath Waterbirth Island and was captured by the Dagannoth. Sigrid revealed to the Regent that they had an engagement, and asked them to rescue him. The Regent discovered Vargas in bad shape, who had attempted numerous escapes, only to fail. The Regent was forced to defend Vargas from numerous Dagannoth, rock crabs and Wallasalkis before finding a ladder that Vargas found unusual, only to cause a collapse that apparently killed the Regent.

They recovered the Regent (who had been returned to the world of the living), and Vargas allowed them to oversee his marriage with Sigrid, before watching the Regent's marriage with one of his children. Following a raid on the Dagannoth mother's lair which resulted in both of Vargas's children dying, he witnessed their pyre funerals. Vargas was inspired by the Regent's ability to cope with the loss and stated that he would do the same, seeing them as the only thing closest to his children now.

Transcripts King Vargas is the author or co-author of: