A Dolmen is an item used during While Guthix Sleeps. When mixing the corresponding potion's ingredients on a statue in the Ancient Guthix Temple, you will receive one of the eight dolmens. When placing a dolmen on the stone table in the temple, a large dolmen will rise from the huge stone circle in the middle of the room. After all eight dolmens are placed on the table, the stone circle will raise up and unlock the door to the Stone of Jas. Oddly, the Dolmens on the stone circle disappear afterwards. 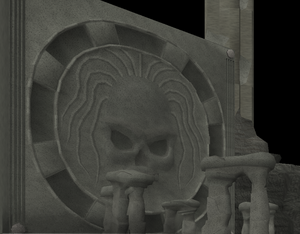 The door leading to the Stone of Jas, just about to be opened with the dolmen circle 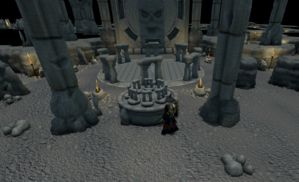 All eight dolmens placed onto the table

This information has been compiled as part of the update history project. Some updates may not be included - see here for how to help out!
Retrieved from ‘https://runescape.wiki/w/Dolmen?oldid=35501874’
Categories:
Hidden categories: