A player that has noclipped into the Unknown 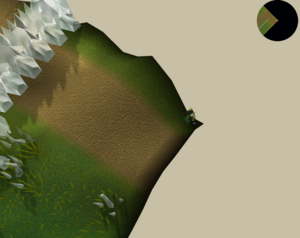 A player stands at a "corner" of the world, looking out into the Unknown

The Unknown was supposedly all of the dark areas in Gielinor where players could neither travel to nor see. These areas were not connected to the World Map and enclosed areas on the map. For example, there was no map area south of the Kharidian Desert and the vast endlessness of these are displayed with black areas on the world map. It is still possible to see the Unknown by walking to the edge of a Player-owned house (where players who have built dungeons can even see their outer walls with the right camera angle).

A player standing near the unknown surrounding Tutorial Island

It is more or less the end of the RuneScape visible area, until something is constructed there. As of 1 July 2008, the "Unknown" was displayed as checkered blue and white squares on the World map, but still remained colourless in-game.

On one version of the RuneScape world map, the "Unknown" is covered in clouds that hide the black areas around Gielinor.

There are many areas in the game that are currently hidden but still have been talked about by NPC's. Here is a list of locations that have been mentioned:

With the release of RuneScape High Detail, the Unknown now comes in more colours than just black, depending upon one's location in Gielinor. This has created a couple of interesting cases where the unknown is known to peek through local scenery such as the trapdoor leading from the Grand Tree ground floor[UK]1st floor[US] down to the mines, this in an unintended feature of the game and can be considered as a small graphical glitch. Some parts of the ground in the wilderness and other hilled locations in RuneScape can also appear transparent when viewed from the correct angle, showing what is on the other side of the hill.

In 2013, various areas of the map were updated to fill out remaining sections of land, placing the unknown out of sight beyond bodies of water.

On Issue 32 of the Postbag from the Hedge 32, Trader Stan revealed that parts of the "Unknown" are really just water.

On Issue 24 of the God letters, Guthix revealed that there exists an underwater city beneath the oceans of Gielinor.