From the RuneScape Wiki, the wiki for all things RuneScape
Jump to navigation Jump to search
For other uses, see Tuska (disambiguation).
TuskaThe World Eater[1]? (edit) 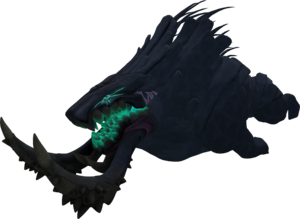 Tuska was a boar-like goddess who attacked Naragun during the Naragi God Wars. She fought against Saradomin, eventually making him move to another realm due to the disruption she caused. Tuska is described as a mindless beast that has managed to attain godhood.

Since Tuska was a formidable foe, her presence attracted Skargaroth to hunt her down. During a fight between Tuska and Skargaroth, Guthix used the elder god sword he had found to severely wound Tuska by stabbing her in the eye, making her completely blind. Tuska finally met her demise at the hand of Vorago, after having attempted to invade and devour Gielinor.

Tuska was once a member of an unknown simple-minded beast-like species who somehow managed to kill an unknown god, and thus ascended to godhood herself. After her ascension, she retained her animal instincts, and proceeded to ravage worlds.[2]

Tuska attacked the homeworld of boar-like creatures at some point. These creatures–now referred to as Airuts–are a proud warrior race, who resort to chaotic, psychological warfare. Many of the Airut joined Tuska due to the strength that she showed. Throughout the years, as the Airut continued to follow Tuska, they became more and more reliant on the symbiotic relationship with the boar god, taking hair dropped by Tuska to form armour and gloves in order to increase their strength. As part of their favour towards psychological warfare, the airut leave the Mark of Tuska stamped on their victims, either as a branding or marks made on the wall.[4] Tuska and the Airut met Skargaroth and Skargaroth followed Tuska through the dimensions to hunt her down.

During the year 1239 of the Naragi, Tuska was summoned by Airut priests to the Naragi homeworld, Naragun. The Naragi managed to lure the beast to Saradomin, who was also attacking the Naragi world, where Tuska crashed upon a fortress of Saradomin. Saradomin materialised and grappled with the beast, though Tuska's destruction forced Saradomin to flee to another realm. Eventually, Skargaroth caught up to and attacked Tuska. Skargaroth managed to blind one of Tuska's eyes and Tuska pushed Skargaroth on a Naragi refuge shelter, killing Aagi, Guthix's daughter. Guthix then took possession of the Elder sword and used it to blind Tuska's other eye and also to kill Skargaroth.

One of the worlds she visited was Mazcab; while she devoured a majority of the planet's anima, she did not destroy it, most likely due to the run-down state the planet was in. However, she did leave a moderate group of airut including Beastmaster Durzag and the Airut shaman, who occupied the planet on her behalf.

For millennia, she would continue travelling through the multiverse, destroying planets and growing in power, until she set her sights on Gielinor shortly after the assassination of Guthix. Wizard Chambers launched a monkey named Apollo into space with a lodestone attached to him. Although Apollo died, the lodestone he was carrying crashed into Tuska's back, embedding it into a scar and allowing players to teleport to her. Later, representatives of four rival factions cloaked the area, shielding all intruders from Tuska's eyes: Gods Armadyl, Saradomin, and Zamorak, along with The Godless faction under Vorago's banner. Soran was also present, having been sent by Zaros, but strictly as an observer and was hidden in the Shadow Realm. 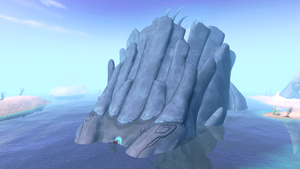 Gielinor's defenders banded together to defeat Tuska once and for all. As Tuska was hurtling towards Gielinor, Vorago appeared and punched Tuska twice to stun her. He then charged up a powerful attack with the Anima Mundi and unleashed it on her, which killed the goddess. However, her limp body still hurtled towards the planet, causing havoc in Falador, Lumbridge and the Wizards' Tower, before landing in the ocean south of the tower.

Tuska's corpse can be explored just west of the Desert Mining Camp, accessible through talking to Wizard Chambers at the bridge south-east of Lumbridge. Unlike other gods who immediately turn to stone upon death, Tuska has yet to do so, as she is slowly leaking anima and it is likely to deplete well past the World Guardian's natural lifetime. One of the results of her death was an anima-powered portal leading to Mazcab.