From the RuneScape Wiki, the wiki for all things RuneScape
Jump to navigation Jump to search
Thaerisk Cemphier? (edit)? (edit)

Thaerisk Cemphier is the current leader of an underground organisation of druids called the Crux Eqal and the author of the Book of the Underworld. He is heavily involved in the While Guthix Sleeps quest. He can be found initially upstairs in the house with the crystal key chest, just west of Pikkupstix in Taverley. At certain point during While Guthix Sleeps, he moves to White Knights' Castle and remains there until the end of Ritual of the Mahjarrat, where he plays a part in hiding the Stone of Jas. During The World Wakes he helps to fight off the assaulting forces and depending on where the player assigns him, he can potentially die and be replaced by a druidess. He is leading the Crux Eqal forces in the Elder God Wars Dungeon.

He was also the host of the 2021 Easter event, selling various cosmetics and consumable items in the Surplus Spring Supplies store.

Thaerisk lived in Taverley most of his life and was initiated as a druid ten years before Lucien's quest for the Stone. He travelled around most of Gielinor and seen tragedy and heartache, triumph and beauty. He also felt that many of his fellow druids are a bit too absorbed in local matters and should look at the larger picture, and thus organised Crux Eqal. He felt angry that while weaker people suffer, stronger people oppress those weaker people.

The following takes place during While Guthix Sleeps and Ritual of the Mahjarrat.

While the adventurer talked to Thaerisk in his house in Taverley, two assassins appeared and attempted to kill him them both. The druid used earth spells when defending himself. When the adventurer killed them, Thaerisk requested them to go to Varrock to continue the quest and offered to sell them a Snapdragon seed later. Afterwards, he moved to the White Knights' Castle and remained there.

After the events of the 14th Ritual of Rejuvenation, Sir Tiffy Cashien wanted to hide the Stone of Jas again. To teleport away the Stone, he summoned Thaerisk. Together, they managed to teleport the Stone of Jas to an unknown location, which it was later retrieved from by Sliske. Afterwards Thaerisk returned to Taverley.

Thaerisk was one of the Guthixians summoned to defend Guthix during the attack on Guthix's Cave by followers of other gods trying to reach Guthix's resting place in order to bring an end to the Edicts of Guthix. He teamed up with an adventurer and the fairy slayer master Chaeldar to fight off the champions of Bandos and Zamorak, facing either General Graardor, K'ril Tsutsaroth or one of the Mahjarrat Enakhra or Zemouregal. After defeating the champions, he rejoined the other Guthixians in defending Juna from Commander Zilyana's forces. One of Guthix's Guardians, the automaton Cres, was slain by the icyene. The forces of Zaros arrived and a fight broke out on what to do about Guthix. They located Guthix, but were too late to help him as he was killed by the Mahjarrat Sliske. In his dying moments, Guthix appointed a new World Guardian. Thaerisk returned back to his post, determined to fulfil Guthix's dying wish. 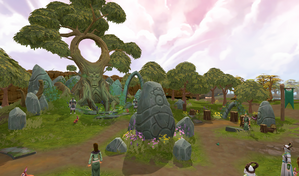 The garden made by the druids.
The following takes place during 2021 Easter event.

When Seren and the Council of Burthorpe commisioned the druids to create a garden meant to appease the Elder Gods, Thaerisk and other Guthixians set it up to th south of the Archaeology Guild. They centered it around the ideals that Guthix represented to promote and celebrate them.[1] When a face manifested on the Tree of Balance, the druids took it as a good omen, although they were worried about the threat of the Elder Gods and dark times ahead.[2] However he agreed that people should live their lifes and celebrite while they can and and that despite Guthix's death the ideals he stood for live on, an outlook reinforced by Thaerisk's own brush with death in the Guthix's Cave. He also expressed that with Guthix gone, the Crux Eqal, which he founded to defend Gielinor, were more needed than ever.[3] To that end he reorganised the group and started recruitment, with both druids and knights working together as a military force, based in an abandonded dragonkin ruin which they previously secured and rescued animals abandoned there. Two of the knights were protecting Thaerisk and the druids during the celebration.[4] 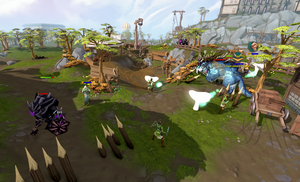 Thaerisk in the midst of the battle.
The following takes place during Battle of the Monolith (miniquest).

During the Battle of the Monolith, when Zarosians forces attemted to claim the mysterious monolith in the Archaeology Campus, Thaerisk and his Crux Eqal knights were part of the joint Guthixian-Saradominist-Serenist alliance. He was one of the commanders that received orders from the World Guardian to keep the Zarosians away from the monolith, the others being Commander Zilyana and Helwyr.[5] When Zaros opened the Codex to enter Erebus, he unleashed Shadow Cacklers upon the world, prompting Zarosians to join their former enemies and the TokHaar joining the battle at a later point. After Azzanadra closed the monolith, putting an end to invasion of the shadow creatures, he ascended to godhood and the TokHaar turned against their former allies, until they retreated due to heavy loses. Thaerisk and his knights were fighting alonside other defending factions throughout the entire battle.[6]

After the Elder Gods began their assault on the Cathedral in Senntisten, Thaerisk and a number of Crux Eqal knights joined the war effort at the western front against the Nodon dragonkin. While he formed the Crux Eqal to defend Gielinor, he didn't expect they would need to fulfill that role so literally and so soon. He also wondered whether Guthix predicted those events and whether the powers bestowed on the World Guardian can prevent the Elder Gods from killing them, although he was reassured that precautions for that were made.[7] Cemphier was watching over an infirmary for wounded Guthixians and Temple Knights. After the glacors began their assault, a number of wounded Elven Knights also ended up under druid's watch. When another front was opened against the Croesus and the attacking forces got closer to the Cathedral, the Abyssal Knights, an organisation fromed from both Temple and Void Knights, joined the defence. However, due to the Temple Knights defection to Zaros, a rift formed in the Abyssal Knights and Grand Master Cemphier tasked their leader, Kenton Decarte, with keeping order.[8]