Humans are one of the most diverse races of RuneScape. Most tend to be taller than dwarves but smaller than Mahjarrat; they tend to be about the same size as elves, but with a more broad and stocky build. They are originally from Teragard. Most humans follow Saradomin, Guthix, or Zamorak, while others have been known to follow other gods and deities. Almost every god has or had some human following.

Humans are also very adaptable. They tend to get along well with dwarves, gnomes and TzHaar, whom they have long established diplomacies with. They also have some limited communications with goblins, although most of the tribes appear to be enemies.

When we first arrived to this plane, we travelled from the east over some white mountains. It was a long journey, and we saw no other humans and few animals....We're the first humans to come to RuneScape. We came from another plane. On our plane, there are a great many people, and the creatures and the scientific laws seem far less strange....Oh no, there are a great many humans that came through the portal, from all corners of our home plane. We're spread out, some in larger groups, but our family decided to travel a bit further afield. From time to time we see others, and we've arranged to meet up once a year to the east and share our experiences.

The human lands include:

This list is a sample of humans within RuneScape:

Also, all players are human (but can change into creatures like goblins or summoning familiars in certain quests and distractions and diversions).

Humans are not a peaceable race; even today, they still frequently engage in combat.

The first humans were transported to Gielinor by Guthix through the Portal of Life from a separate, seemingly more crowded world. The first human inhabitants of Gielinor were frequently visited by Guthix, and at the time knew of no other gods. However, according to Laura, Guthix was "keen to point out" that he didn't create them, not wanting them to believe he was responsible for their creation.

During the rest of the First Age, humans were busy exploring their new realm, and the early humans started to form the basis for their civilisation. At this time the first wizards, such as Jack Rogersson, used the runes left behind by Guthix to create the first spells. They also wrote the first spell books.

In the beginning of the Second Age, all humans were nomadic people. However, it did not take long for them to begin to spread and divide, and before long humanity had spread across the world, establishing the oldest surviving city in Kharidian Desert. Since Guthix by this time had entered his long slumber, humans started to follow new gods, notably Zaros and Saradomin. Nearly all humans during this era spoke Infernal, even those under the rule of Saradomin,

A Human crafts runes at the Earth Altar.

Humanity played a key role in the God Wars. During the God Wars, like almost every race, humanity nearly became extinct. The wars also made them violent, to the point of opposing one another.

When the Fourth Age began, almost every human settlement had been destroyed and most of the humans were living a nomadic lifestyle again. The only known free humans with permanent settlements lived in the refugee town Burgh de Rott and the twin settlement Menaphos/Sophanem. As the Fourth Age progressed, humanity began to prosper. Many heroic tales and legends come from this age. Varrock was founded with the help of Arrav, and the evil of Morytania was sealed away by The Seven Priestly Warriors. Humanity, though, was competing for land with nearly every other race, and so they were involved in many wars and battles. Still, they were nothing approaching the God Wars. Humanity gained supremacy when the Fremenniks discovered rune essence. While some of the Fremenniks disagreed and claimed the stones should not be used, others began crafting it into runes.

The Fifth Age, or the Age of Humans, began when these runes fell into human hands. Kept a closely guarded secret between a select few mages, rune essence began to be made into runes. Humanity could finally defend itself from attacks using magic. Civilisations grew and new land was conquered. Before long, humanity had become the dominant species in Gielinor. However, the Wizard's Tower was burned down by Zamorakian mages, thus the secrets of Runecrafting were lost to most of humans. That marked the end of expansion of humans and from that point they used runes mainly to defend themselves from outsiders. Later on the lost knowledge of Runecrafting was rediscovered and humans once again started using these for magic, significantly regaining much of their lost prestige and power.

Humanity is still dominant for the time being as of the Sixth Age, but this could all soon change. Nevertheless, human adventurers have played crucial roles in recent events occurring all over Gielinor's surface and depths, and even in adjacent dimensions and planes, ranging from slaying apocalyptic demons, destroying powerful dragons which have laid waste to entire settlements, discovering long-lost secrets of gods, interacting with all the other Gielinorian races, either as allies, as enemies, or neutrally, and repelling the evil of both the Wilderness and Morytania. 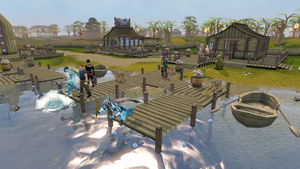 A group of humans fishing in a harbour, specifically the Fishing Guild