From the RuneScape Wiki, the wiki for all things RuneScape
Jump to navigation Jump to search
The Old School RuneScape Wiki also has an article on: osrsw:Rellekka
For the music track, see Rellekka (music track).

Rellekka is a town in the Fremennik Province located by the Lunar Sea, serving as the region's capital. It is home to the Fremenniks, a hardy people who place great value on tradition. All Fremennik living there must pass a series of tests known as The Fremennik Trials, which players themselves can undertake, in order to be considered adults. Should players pass these trials themselves, they will be considered honourary Fremennik, be addressed by their Fremennik name, and gain access to all the facilities of the town.

Rellekka acts as a hub for travelling to the various islands of the Lunar Sea, with boats sailing to and from Miscellania, Jatizso, Neitiznot, Lunar Isle via Pirates' Cove, Waterbirth Island and V's Island. It is also located near the Brine Rat Cavern and Fremennik Slayer Dungeon, and hosts a Rellekka Hunter area to the north-east of the town.

The town is ruled by a council, who decide whether outsiders can be considered Fremenniks. It was the site of the Battle for Rellekka. 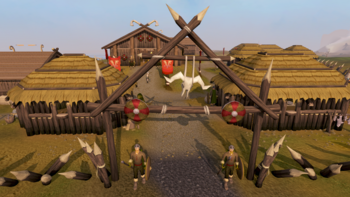 A player using the Enchanted lyre to teleport to Rellekka.

There are no banks in Rellekka, but the nearest ones are on the islands of Neitiznot and Jatizso, Miscellania and Etceteria, or at Seers' Village. However, if the player has started but not yet completed The Fremennik Trials, or if they have completed the Easy Fremennik Province Tasks, then players can deposit their items with Peer the Seer.

A turkey roasting above the fire on a wooden spit.

The marketplace is perhaps the most important part of Rellekka. It is a well-known thieving spot and is frequently visited by hunters and fishermen.

A player drinking a Keg of beer.

In the marketplace, there are many thieving spots, including 3 fish stalls and 2 fur stalls. There is also a Fremennik wandering around that can be pickpocketed. It is not so easy to steal from the stalls, though, as they are heavily guarded by Rellekka's Market guards. Sigmund the Merchant also sells a variety of goods in a general store-like shop that many players don't know about, as it is not shown on the world map. 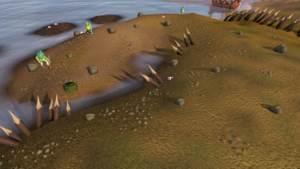 The rocky coast north of the town.

Rellekka, built next to the sea, is a thriving port town. Ships travel to and from Rellekka regularly. From Rellekka it is possible to travel to:

Apart from all of this, there are also dozens of fishing spots on the docks.

The marketplace of Rellekka is an excellent place to thieve. There are 3 fish stalls and 2 fur stalls, guarded only by level 48 Market Guards which patrol the area. There are also several Fremennik citizens who can be pickpocketed, and three chests with loot such as nature runes, coins, and steel arrowheads.

The docks in Rellekka are teeming with fish. In fact, Rellekka has one of the largest varieties of fishing spots in all of RuneScape. Within Rellekka it is possible to catch shrimp, sardines, herring, anchovies, mackerel, trout, cod, tuna, lobster, bass, swordfish, and shark. While big net fishing it is also possible to get seaweed (useful in crafting), leather boots, leather gloves, and caskets. To support all of these facilities, there is a fish trader who will buy and sell raw fish, as well as fishing supplies such as bait. In fact, the distance between Peer the Seer and the fishing spots is less than the distance between the Catherby bank and the Catherby fishing spots, making this an even more efficient training spot than than the more commonly used Catherby spots.

There are two firepits in the main lodge that never die out. Players can obtain raw fish by fishing in the nearby spots, or buy/steal them from the fish monger in the market. There is also a dairy cow and churn to make milk into dairy products like butter, cream, or cheese. There is also a small non-player-owned field where players can pick cabbage, onions, and potatoes for cooking.

It is possible to craft glass without ever leaving the area. By big net fishing, it is possible to gather seaweed. Even faster, though, is the method which involves the north-eastern beach. North-east of the village is a large beach swarming with rock crabs (which drop seaweed), as well as many seaweed respawns. The sandpit is in northern Rellekka and the furnace is in western Rellekka.

There is also a flax field just south of the village. The spinning wheel west of the marketplace allows players to make bowstrings without leaving the village, and in the same location can be found a potter's wheel and a pottery oven. There also is a well south-east of the longhall.

To the north-east of the longhall of Rellekka there is a mining area with five mithril rocks. To the north-east of Fremennik Province lodestone there is another mining area with several iron rocks. At the very end of the Hunter Area north-east of the town, there are banite rocks as well. There is a furnace, three anvils and two forges on the other side of town, in the south-west corner. When paired with the expansive mine on Jatizso, this area can be used effectively. This is the ideal spot for mining coal if players are wearing the Fremennik sea boots and have access to the bank in Jatizso. Talk to Peer the Seer to deposit their ores, then just go to Jatizso and pick them up at the bank when the player is ready to smelt.

The nearby Rellekka Hunter area hosts a large variety of creatures to capture and is one of the largest hunter spots in RuneScape. In Rellekka, there is a fur trader who will buy all hunter fur. There also seems to be a large amount of Implings in the area, particularly on the path to the south of the city.

Players with level 30 or higher construction may move their house to Rellekka by talking to one of the Estate agents in Varrock, Seers' Village, East Ardougne, or Falador. The nearby clay mine, oak trees, and regular trees are excellent for gathering building materials. The nearby Stonemason in Keldagrim also is extremely helpful when building more high-levelled furniture.