From the RuneScape Wiki, the wiki for all things RuneScape
Jump to navigation Jump to search
The Old School RuneScape Wiki also has an article on: osrsw:Brassica Prime

Brassica Prime is the cheerful patron god of all cabbages[1] and, as such, takes the form of a giant cabbage. He claims to command the power of highly concentrated nutrients.[2]

Likely due to being a giant vegetable, Brassica Prime believes that power comes from deliciousness,[3] probably due to the fact that most fruits and vegetables wish to be eaten to spread their seeds around, and thus the more deliciousness, the more chance of being picked and propagating.[4]

Originally intended as an April Fools Day joke, Brassica was involved in the 2007 April Fools event, the 2009 April Fools event, and makes small appearances in The Death of Chivalry and Missing, Presumed Death. He also features in the Cabbage Facepunch Bonanza with the monkey goddess of parties, Marimbo, and briefly appeared for Sliske's Endgame.

Deliciousness is power!
Brassica showing a darker desire for power

Brassica is a cheerful god, and seems to enjoy relaxing and bouncing.[7] As his appearance would imply, he is extremely fond of cabbages, and considers the cabbages of RuneScape to be his followers. Brassica Prime also seems to value persistence, and has twice rewarded those who have demonstrated it.[8][9]

Brassica appears to be rather delusional, and believes himself to be the only god, describing the other gods as mere "fleshy giants."[10] He also believes himself to be immune to fire, including the breath of the powerful dragonkin Strisath, as he puts it, "a roasted cabbage is a delicious cabbage, and deliciousness is power."[3]

Despite his seemingly frail appearance, Brassica believes himself to be extremely powerful, and with the use of the "highly concentrated nutrients" he commands, he considers himself to have no need for the Elder Artefacts, including even the Stone of Jas (or the "Cabbage of a Thousand Truths" as he calls it).[2] The accuracy of his claims are questionable however, due to his apparent insanity.

During the Cabbage Facepunch Bonanza, he tells the player that his dominion is not limited to "just" cabbages, but that "All cabbage-kind and all cabbage related things" are his to control; pointing out that the world is "shaped like a giant cabbage" and that "the giant, glowing cabbage in the sky" is "the source of light and heat in this world." He also tells the player "Nothing can exist without cabbage. I have foreseen it."

Brassica Prime not only claims deliciousness as the source of his own power, but that it is also a universal force: "For deliciousness infuses every micro-cabbage that forms the world around us. It flows through the cosmos, infusing every living thing - thus binding them together. From the tiniest, humblest cabbage on this world to the giant space-cabbages that will soon arrive to enslave humanity, all are connected by the deliciousness." He also insists that "to be the most delicious is to wield this power. The power to create and destroy," and as "the most delicious of gods" he is "the font of this delicious power!", proclaiming to the player "From me spills all the deliciousness in creation."

Brassica is one of the most mysterious deities, with nearly nothing known about his past prior to the Fifth Age. Some of his followers believe him to be a product of the Anima Mundi, in a similar fashion to Vorago, and thus tied to Gielinor's well-being, although there is no evidence to support this claim.[11]

Although Saradomin claimed that all current gods participated in the Gielinorian God Wars, it is likely Brassica did not, as Guthix elected not to banish him. Guthix thought long and hard on what to do with Brassica Prime. At first, his complicated and confused speech troubled Guthix, but he came to realise that he possessed a profound connection to the Anima Mundi and a deep understanding of Guthix's vision. He resolved not to banish him.[12]

He often stayed by Seren's shattered pieces, chatting on about things such as the many ways a cabbage can be delicious. Due to her broken state, she could not respond, but Brassica Prime mistook her silence for interest, much to her chagrin. However, in the present day, Seren states that she views him with favour and friendliness, as does Armadyl, owing to his whimsy and insanity.

An adventurer kicks a cabbage into Oo'glog, causing Brassica Prime and a big fireworks display to appear!

In 169 of the Fifth Age, the cabbages of Falador Farm began jumping around with intense joy, exclaiming various phrases, although cabbages in other locations remained stationary.

Adventurers who kicked one of these bouncing cabbages all the way from Falador to Oo'glog were rewarded with a fireworks display and an audience with Brassica Prime himself. Brassica claimed to be impressed by adventurers "looking after one of [his] followers so well," and rewarded them with an ordinary cabbage.

The following takes place during The Death of Chivalry.

When the god of order, Saradomin visited Edgeville Monastery to impart a mission to Sir Owen and an adventurer near the start of the Sixth Age, he inadvertently disintegrated nine cabbages, with the three remaining cabbages being lightly quick sautéd, rendering them unsuitable for consumption.[13] This angered Brassica, and as a result, he now bears a grudge towards Saradomin.[14] Adventurers are able to replant these cabbages by using 12 cabbage seeds on their scorched remains for some experience in Farming.

After the adventurer completes Saradomin's mission, they are able to find a gilded cabbage in a coffin within an ancient Saradominist crypt located near the God Wars Dungeon. If they kick this cabbage 30 times in a row without picking it up, Brassica Prime will speak to them, praising their persistence, and rewarding them with 10,000 bonus Prayer experience.[9] 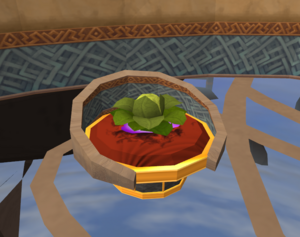 Some time after the destruction of Brassica's cabbages, the Mahjarrat Sliske attempted to gather most of the gods in the Empyrean Citadel, which he had captured from Armadyl, in order to make an announcement.

Brassica Prime was one of the gods whom Sliske invited,[15] and unlike many other gods, Brassica attended the event. Although he was silent during the events that transpired, Brassica was oblivious to the true purpose of the meeting; he believed that the "fleshy giants" were simply paying tribute to him.[10] Additionally, he was uninterested in the Stone of Jas, which Sliske announced he would give to the being who kills the most gods by the time of the next eclipse.[16]

After Sliske released the enraged Dragonkin Strisath on the gods, Brassica did not flee the citadel for he believed he had nothing to worry about, as "everyone knows cabbage beats fire."[3]

The godly voice of Brassica Prime

He currently remains at the citadel, sat atop his podium, relaxing and enjoying the scenery, enjoying the podium's cushion on his leaves,[7] although he believes there is a need for a cabbage patch.[17] Brassica is happy to chat to any adventurers that talk to him, and will answer any questions they ask. 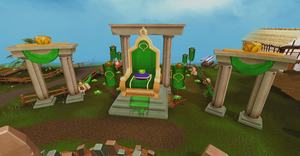 Brassica Prime on his throne in Lumbridge.

As soon as the goddess of monkeys, Marimbo, returned to Gielinor, Brassica Prime faced off with her at Saradomin's old camp next to the Lumbridge Crater. However, the two gods' competition was not fatal, and more friendly than other god battles that have occurred in the Sixth Age. At the end, Brassica won the competition over Marimbo and the Godless.

Brassica Prime appeared at the gathering of the gods for Sliske's Endgame. When Sliske joked that nobody would wish to leave after having arrived, Brassica and Marimbo both declared disinterest in obtaining the Stone of Jas and promptly left.

Relationship with other gods[edit | edit source]

Whilst the crystalline goddess was in her fractured state, she often found herself near cabbages. Mistaking her inability to speak for interest to his philosophy on life, Brassica Prime began to ramble about the many ways cabbages could be delicious, much to her annoyance. However, in the present day, she has stated that she views the vegetable god as a friend and does not bear any hostility towards him for his seemingly endless chatter.

Armadyl sees Brassica as somewhat insane, but thinks favourably of him as he appears to enjoy life more positively than the other gods do. In his own words, he sees him as a friend, likely in a similar way to how Seren does.

Guthix was at first disturbed by Brassica's confused speech, but in later conversations came to think favourably of the cabbage and found him quite amusing. Despite its obsession with "deliciousness", he thought it displayed a profound understanding of the cycle of life and the acceptance of the sacrifices all must make. In fact, Guthix considered Brassica's connection to the Anima Mundi deeper than almost any other being he had encountered. After thinking about the matter for a long time, Guthix went so far as to allow Brassica to stay, whereas he had banished the other gods.[12]

Although the god of order never openly sought Brassica out in negative terms, he earned the disfavour of the vegetable god by incinerating nine cabbages at Edgeville Monastery by projecting an image of himself there, and leaving the three remaining cabbages unsuitable for consumption. Saradomin is now held in a somewhat negative light accordingly. Equally, Saradomin views the cabbage god with disdain, believing he is not a god at all.

The cheerful monkey goddess Marimbo plummeted from the sky with Brassica in hand in the first year of the Sixth Age, and began a friendly battle. When emissaries of The Godless faction arrived to preach their intent to remove their influence from the world, both Brassica and Marimbo drove them away. Although Brassica reacted with indignation at Marimbo's claim to have the best food, it is likely the two remain friendly.

Perhaps uniquely among the major gods, Zamorak is cautious of Brassica, viewing him as a potential threat owing to fruit and vegetables being widespread as food. He believes Brassica to be a joke, but also said that joke is an act to lower peoples' guard.

Brassica Prime on his throne during Cabbage Facepunch Bonanza.