From the RuneScape Wiki, the wiki for all things RuneScape
Jump to: navigation, search
This article is about the deity. For the jungle named after the deity, see Kharazi Jungle.

Kharazi is one of the deities mentioned in the The End of Gara-Dul, he is the husband of Shaika and father of Raharni. He is a skilled musician and used his power to protect the god-beast Gara-Dul along with his family. When a native tribe attempted to slay Gara-Dul, Kharazi and his family defended it, but died shortly, after being infected by a blood-transmitted disease from the tribe. 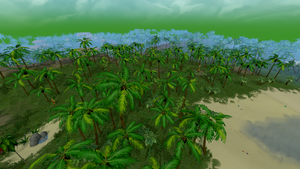 The Kharazi jungle, named after Kharazi.

Generations after Kharazi's death, Gara-Dul decided to end its life and poured out its anima into the earth, killing itself in the process. Gara-Dul's energy resurrected Kharazi and his family and they returned to life as demigods. Surprised by being returned to life, Kharazi and his family carved some images of Gara-Dul to honour it and then departed their homeworld to find a new place to call home. At some point they came to Gielinor, but little is known what happened to them after that.