Shaika is one of the deities mentioned in The End of Gara-Dul, she is the wife of Kharazi and mother of Raharni. She is a skilled hunter and used her hunting skills to feed and protect the god-beast Gara-Dul along with her family. When a tribe attempted to slay Gara-Dul, Shaika defended it, but died shortly after, after being infected by a blood-transmitted disease from the tribe. 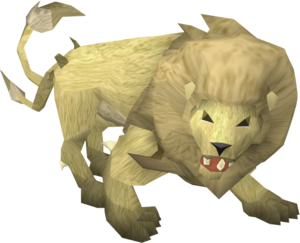 She died shortly after her husband and daughter to the disease as well, and generations later Gara-Dul decided to end its life and poured out its mana into the earth, killing itself in the process. Gara-Dul's energy ressurected Shaika and her family and they returned to life as demigods. Surprised by being returned to life, Shaika and her family carved some images of Gara-Dul to honour it and then departed their homeworld to find a new place to call home. At some point they came to Gielinor, but little is known what happened to them after that.