A player trying to take the Treasure pile.

Movario's base was discovered during the While Guthix Sleeps quest. When the quest is completed, as a quest reward players are able to loot the base's storage room. The contents of the room can be looted only once. Fully looting the base is a requirement of the Master quest cape.

The base has magical interference that blocks use of some spells. Except in the main area, teleportation spells do not work in the base. Throughout the entire base, alchemy spells and possibly some other spells also do not work.

If you attempt to loot the treasure pile in the study, you will take 500 life points of damage. The gold pile's trap will reset after being triggered, so there is no way to get the gold. Investigating the loot gives the message "After a quick search, your suspicions are confirmed... It was too good to be true; it's just worthless fakery, placed here to sucker someone."

A map of the base[edit | edit source]

The entrance to the base is in a ruined building on the Khazard Battlefield. The building can be entered by climbing the broken wall on the south side of the building. Players find the entrance by following a Broav in the While Guthix Sleeps quest. In the quest, the trapdoor to the base is hidden under a broken table. Once found for the first time, the trapdoor remains revealed and the Broav is not required any more.

The quickest way to get to the base is to use a Spirit tree to go to the battlefield. Other practical options are to use an Ardougne teleport, an Ourania Teleport from the Lunar spells, or fairy ring DJP to the Tower of Life. (Several of these methods are available only through quests, but it is virtually guaranteed the player will have completed the appropriate quests before starting While Guthix Sleeps.) 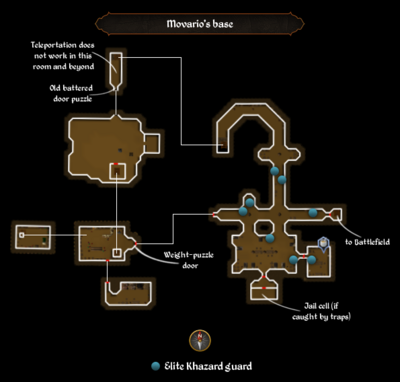 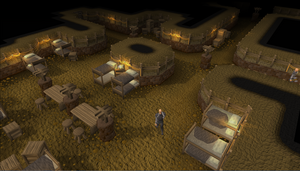 The main area contains many Elite khazard guards. They are weak to fire spells and use only melee, which hits into the low to mid 200s. It also has the jail cell. Players who fail various traps in the base are thrown in this cell. The cell's lock must be picked for the player to exit the cell (alternatively, the player can just teleport away if a teleport method is available).

The only way to proceed is down the stairs located in the northern part of the room. As the player advances through the base they will not be able to return through the doors that they have passed. Upon entering the short corridor through these steps the player will get a message, 'You sense magical interference of the sort to disrupt teleportation.' Teleports do not work in this area and beyond.

The old battered door at the end of the short corridor contains a puzzle to be solved in the While Guthix Sleeps quest. Opening the door without searching for traps will set off a trap. This will hit the player for 350 life points and an 88 damage poison condition. It will also summon three elite Khazard guards, which must be killed before attempting to open the door again. The puzzle needs to be solved only once to permanently deactivate the trap. However, at all times, players whose weight is 0 kg or less cannot pass through this door. Instead, players receive the message, 'Something seems to be jamming the door from the other side. It appears to be something to do with your weight.' However, players can unequip weight-reducing gear (boots of lightness, spotted cape, etc.), pass through the door, and then reequip the gear. 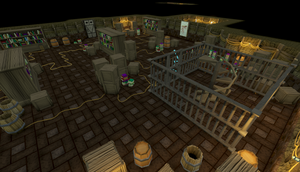 The next room contains a secret area that is accessed by searching the painting. When searched and opened, it reveals a broken wall that players can climb over to enter an with the thermometer, drawers, and weights. In the quest, players find the Notes on pressure in the drawers. The room also has an electrified gate, which cannot be passed until the electricity is turned off during the quest. Once turned off, the electricity thereafter remains off. 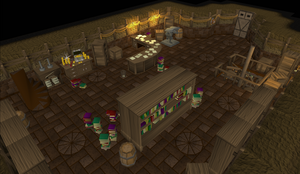 Going up the stairs takes the player to Movario's office. The study is where Movarios' notes volume 1 and the Ruby key are found. The treasure pile in the study is trapped with no way to deactivate the trap. You will take a damage of 500 Life Points if you try to take the treasure, so it is not recommended to do so. The door back to the main area of the base can be accessed in two ways:

From the study the player can go up the stairs to enter the bed-chest chamber. These stairs are hidden in the quest and are be opened during the quest using the Ruby key on the western bookcase. In the quest, this room contains a trapped chest hidden as a bed. Players open this bed-chest during the quest to get key items: the Strange key loop, Strange key teeth, and Movarios' notes volume 2.

They could also enter the door/passage between the study and storage room. The storage room can be looted after the quest. See below for details. 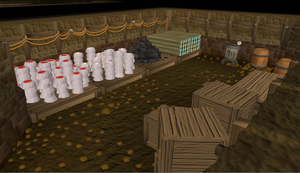 The room with Movario's loot.

From Movario's study, you can enter a tunnel on the south wall of the room which leads to a storeroom with items you can loot (100 of each kind) after the quest, it consists of the following items:

When leaving, players must leave by the study's door. But it's not possible to exit the base, if the player's weight is 0 kg or less.

Players will thus need to do the weight puzzle or just force the door and take the damage from the trap. For players who can take the damage, forcing the door is the quick way out.

To solve the weight puzzle;

To minimise the time and number of trips required to loot the store room, try the following:

Also, if you spam click a teleport such as the Varrock teleport as you are gassed, you won't take any damage whatsoever. However, any quest related items i.e. the key parts will still vanish. However, this is a good strategy to loot the base without taking any damage.

During the While Guthix Sleeps quest, the battered door in the short corridor is initially locked.

To unlock it (and avoid activating a trap!) a certain type of rune must be placed on the door. Closely examine the text on the door to determine what type of rune to use.

The word 'prOHibitED' is the key to which rune to use. The shape of one letter of the word hints at the correct rune. If the wrong rune is used, the player is blasted by a spell. (The colour of the blast tells correct rune that should have been used. However, the trap resets and may require a different rune the next try.)

This information has been compiled as part of the update history project. Some updates may not be included - see here for how to help out!
Retrieved from ‘https://runescape.wiki/w/Movario%27s_base?oldid=35684358’
Categories:
Hidden categories: