From the RuneScape Wiki, the wiki for all things RuneScape
Jump to: navigation, search
This article is about the dwarf involved in the Forgiveness of a Chaos Dwarf quest. For the Fremennik that guards Daemonheim, see Hilda (Fremennik).

The chaos dwarf hand cannoneer defeated by the adventurer during Forgiveness of a Chaos Dwarf, later known as Hilda, was once a free dwarf hailing from East Keldagrim, now a deceased servant of the Red Axe. She was a love interest of Commander Veldaban's. 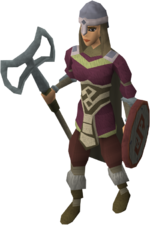 Hilda as depicted in The Coat Thief

Not much is known about Hilda's early life, other than she spent a childhood in the slums of East Keldagrim with her brother. She met Commander Veldaban three weeks before the player started Forgiveness of a Chaos Dwarf, when she went to Black Guard Headquarters to report her missing brother, stealing a rich dwarf's bearskin shawl to make a good appearance. She returned the shawl and teamed up with Veldaban. They discovered Red Axe's base, but were discovered, ending with Commander Veldaban having his memory wiped and Hilda being turned into a chaos dwarf. 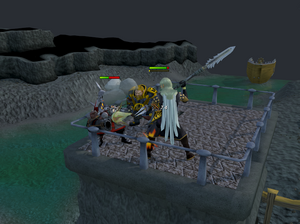 Hilda fights Veldaban and an adventurer

Hilda was one of the chaos dwarves that attacked the Keldagrim mines. Before being sent to kidnap more dwarves from Keldagrim East along with another chaos dwarf, she somehow was able to secure a package at the Grand Exchange containing various objects and clues that she knew would be useful to Veldaban.

She was stationed at the top of the Keldagrim Watchtower in the mines where she was forced to make a stand against the Black Guard. Her fellow chaos dwarf was more easily subdued, but Hilda put up a bigger fight. From atop the tower she used her hand cannon to kill six dwarves and badly wound a few more before finally being killed by Veldaban's adventurer companion.

After the quest, if Veldaban survives, the player can offer to use the memory wand to restore his memories of Hilda. He is initially reluctant, unsure of how much about her he may have made up but if the player encourages him, he agrees. He doesn't share his revelations, saying that it is between him and his memory of her, but thanks you for doing it.