When she was a little girl, she dreamed of being a princess.[1] However, she finds royal life boring, as rarely anything happens on Etceteria, due to the nation being small and insignificant.[1][2] She spends her days winding up King Vargas, the ruler of the neighbouring nation of Miscellania, usually by insulting him, which causes him to declare war.[3][4] Despite her treatment of Vargas, she thinks fondly of him and believes them to be a good match.[5]

Her ancestors used to send raiding parties to Waterbirth Island to battle the dagannoth, wielding the Balmung. Though her family doesn't participate in the raids any more, she still holds the axe.[6]

She is the answer to the Treasure Trails anagram SEQUIN DIRGE and gives players a puzzle box to solve.

The following takes place during Throne of Miscellania.

During Throne of Miscellania, King Vargas tasked a potential heir with restoring peace between Miscellania and Etceteria. Queen Sigrid was willing to sign a peace treaty provided Vargas recognised Etceterian sovereignty and relinquished his claim to her land. Vargas refused as the Etceterian national anthem, composed by Sigrid, was insulting. Sigrid agreed that the anthem was insulting and tasked the potential heir with composing a new anthem, as Etceteria lacks a bard of its own. After getting an awful anthem from Prince Brand and an improved anthem from Advisor Ghrim, she agreed to sign the peace treaty, granting a temporary reprieve to the Miscellania-Etceteria War. 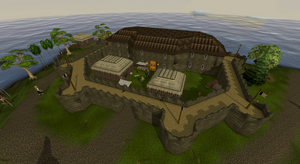 Facade of the Castle of Etceteria

During Royal Trouble, her goods are stolen by some teenagers pretending to be Miscellanian soldiers. When the goods are returned, she will ask you to give a letter to King Vargas. When read by the player, it becomes known that she harbours a love-hate relationship with Vargas, and that should he be freed from his curse and become human again, she would like to 'get to know him better'. This marks the end of the long-lasting feud between the two nations of Miscellania and Etceteria. 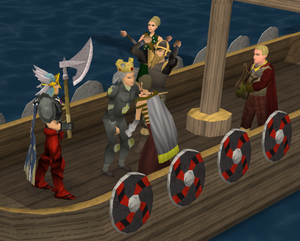 You may kiss the bride!

During Blood Runs Deep, you marry her to King Vargas. She will then give you Balmung, which can be re-obtained from either her, Kharshai, or Chieftain Brundt after completion of the quest.

She loses her stepchildren in battle; her last scene in the quest depicts her crying during the funeral.

After the quest, she can be found living in the Castle of Miscellania.

Transcripts Queen Sigrid is the author or co-author of: