From the RuneScape Wiki, the wiki for all things RuneScape
Jump to: navigation, search
The Old School RuneScape Wiki also has an article on: osrsw:Tumeken
This article is about the god. For the cosmetic override, see Tumeken Banner.
"Lord of Light" redirects here. For the artefact, see 'The Lord of Light' painting.

Tumeken (pronounced TU-muh-ken), sometimes referred to in Menaphite texts as the Lord of Light and the God of the Sun,[1] is the god of light, the husband of Elidinis, the father of Icthlarin and Amascut, one of the four major gods of the Menaphite Pantheon, and co-founder of Kharidian. He is also responsible for using a piece of his essence to create the four minor gods of the pantheon, Het, Crondis, Apmeken, and Scabaras. Because of this, Tumeken is directly or indirectly responsible for creating a majority of the desert pantheon and can be seen as its leader, though he has not been active since the Second Age.

Tumeken was said to be a dreamer, an idealist who was quick to turn away from problems[3]. As the creator of most of the desert gods, Tumeken has been heavily mythologised by the Menaphites, making finding accurate statements regarding his character or history difficult. As he was mostly a regional god who did not interact much with surrounding territories and disappeared early in the Second Age, there is little to no information about him in other countries. A popular tale that is available about the god is Tumeken's dream, a Menaphite legend about the creation of the lesser gods, though the accuracy of the tale is dubious. Reldo, the scholar who translated the text, suggests the tale exists to pass on Menaphosian beliefs rather than being a historic document.

Tumeken arrived early on Gielinor in the Second Age like many other gods during that time after the god Guthix had gone to sleep. Little is known about Tumeken's arrival, but he would claim the area known as Kharidian for himself and the humans living there as his subjects. These humans were the ancestors of the modern Menaphites. The Kharidian Lands at the time were a vast area, stretching from Al Kharid in the north to what would later become Sophanem in the south, had lush areas of forest, and were rich in resources. Little is known from this time; however, according to legend, he would meet the goddess Elidinis along the River Elid and took her for his wife, and Icthlarin and Amascut were sired from their union. This was the creation of the four major gods of Kharidian, and they have shaped its destiny and the world beyond. Like many other gods at the time, the family established an empire, though its size and wealth was greater than most.

It is unknown why he created the minor gods of the desert. Tumeken's dream suggests they were created upon witnessing the failings of his children, suggesting that they were created after the war with Zaros, but other evidence implies that they were created before as they were well established by the time of Queen Senliten. Likewise, Tumeken's sacrifice would make it impossible to create any later deities. However, according to legends, Tumeken entered a deep sleep and dreamed. Every day for four days, he would visit a section of his lands, and at the end of each day, he would create one of four avatars of his essence: Het, Apmeken, Crondis, and Scabaras. These four were each given a duty by Tumeken to help Menaphite society. 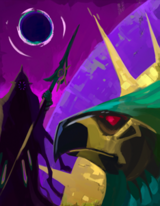 'Solem in Umbra', a Zarosian artist's depiction of Tumeken as a green-headed falcon on the battlefield against Zaros.

Tumeken's role in the Kharidian-Zarosian War is unknown, but he played a key role in its end. After the schism of the Mahjarrat, a majority sided with Zaros, and Zarosian reinforcements reversed the tide of the war and pushed the few loyalist Mahjarrat Menaphite forces south. Right when the Menaphite force were going to stage a last stand, Tumeken appeared and created a large magical blast of fire, killing hundreds of Mahjarrat and annihilating the forces on both sides, forcing the Zarosians to retreat.[4] His fate after this is unknown, and while Kharshai believes him to have perished in the blast, his son Icthlarin merely believes him to be sleeping.[5]

The loss of Tumeken was a great blow to both the Menaphite civilisation and the desert Pantheon. With his absence, it seems that Icthlarin and Elidinis took on the position of leaders of the desert pantheon. Amascut's warping would cause great trouble for both. Thanks to the great desert now separating Kharidian and Zarosian's empires, there was never again an invasion of the same scale of the first war, though tension still existed between the two by the time of Queen Senliten. The Menaphites readily adapted to their new environment, and the cities of Uzer and Ullek became Kharidian's greatest cities.

During the God Wars, the desert held out relatively unaffected for three millennia as many battles to the north of the continent drove mass amounts of refugees south. There is evidence that during this period, Elidinis made an alliance with Saradomin, who created a massive front north of the desert that lasted for centuries. However, this front would eventually fall when Zamorak launched a massive invasion called the Kharidian Desert Campaign that would lead to the destruction of first Uzer and then Ullek. Fighting between Saradominist and Zamorakian armies would devastate the Kharidian lands even more than Tumeken's sacrifice. With the destruction of the continent Forinthry to the north by Zamorak, Guthix awoke and banished every god of sufficient power from Gielinor. Elidinis was affected by this and was forced to leave, though her children Icthlarin and Amascut could stay due to their lack of power. Het, Crondis, Apmeken, and Scabaras were also allowed to stay for the same reason.

After the God Wars, the surviving Menaphites built a number of settlements that had once been battlefields. Icthlarin had become more involved with the affairs of the Underworld, to the point that he no longer visited the surface. Amascut, taking advantage of her brother's absence, proceeded to undermine the lesser gods of the Pantheon, stealing Apmeken's sight, hearing, and voice, creating monsters from each. She is also suspected to have played a role in the banishment of Scabaras. The culmination of her plot was the theft of the Kharid-ib, a jewel suspected to have a connection with Tumeken himself. Her motives for stealing the jewel are unknown.

There are contrary statements to Tumeken's current state. Kharshai's memory of the end of the Kharidian-Zarosian War implies that Tumeken sacrificed himself in a blast to destroy the invading army and create a barrier between Kharidian and Forinthry. Tumeken's words during the memory imply this, saying that Menaphites join him in making the "ultimate sacrifice," which signifies that he died.

However, Icthlarin and several sources from Jagex suggest that he is currently sleeping. It has been suggested that he slept to avoid the Edicts of Guthix. A seemingly possessed human astrologist from the Second Age implied Tumeken is in mourning and hiding.[6]

Shortly after, the Mahjarrat Temekel said Tumeken is still alive and will return.[7] The Kharid-ib loosely translates to The Heart of the Sun. Whether the phrase means that the jewel is Tumeken's heart or it shares a more symbolic connection with the god is unknown.

Tumeken is revealed to be alive in 'Phite Club, though his status is still unknown. He possesses Jabari and two Thralls in an attempt to persuade his daughter to stop her actions, though he fails to do so.