From the RuneScape Wiki, the wiki for all things RuneScape
Jump to navigation Jump to search
The Old School RuneScape Wiki also has an article on: osrsw:Askeladden
Askeladden? (edit) 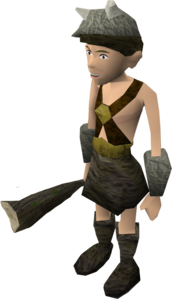 Askeladden (Fremennik name Larravak) is a boy who is featured in The Fremennik Trials and The Fremennik Isles quests. He can usually be found just outside of Rellekka's longhall.

Askeladden aspired to become a Fremennik, which required him to complete his "trial of manhood". This had proven difficult, but Askeladden eventually completed the trials and became an "adult". His Fremennik name, when talked to after completing The Fremennik Trials, is Larravak.

He is not liked by Thora the Barkeep, who calls him a "little monster" because he keeps sneaking into the long hall to steal beer, which enrages her. He also made fun of Armod and his friends who were older than him but kept failing their trials.

He gives away pet rocks during and after the quest. He is also found on Waterbirth Island, on a large snowy hill that must be accessed from a ladder in Waterbirth dungeon's central room on the first sublevel. While on Waterbirth, he will trade cooked lobsters for the player's Dagannoth hides, which can be obtained by killing the dagannoths that swarm beneath the island. He also says that he will buy kegs of beer from the player for 700 coins each.