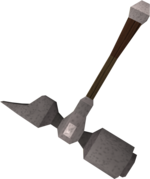 Its primary use is to combine the three ruined dragon armour pieces into a dragon platebody at the Dragon Forge, requiring level 92 Smithing. The hammer can only be used to repair one platebody, after which it will crumble to dust. The hammer can also be used for regular smithing and will not disappear. However, the hammer cannot smith together godsword shards to make a blade. The hammer is also required to smith a Pickaxe of Earth and Song.

If unused, the blast fusion hammer can be sold back to the Blast Furnace Foreman for the original purchase price of 1,000,000 coins. Smithing regular metal does not reduce the price in any way.