From the RuneScape Wiki, the wiki for all things RuneScape
Jump to navigation Jump to search
For the Barrows Brother, see Akrisae the Doomed.
Loading...
StandardIn combat

Akrisae Kolluym was a Saradominist priest who worked for the Temple Knights. He oversaw the plan to deal with the Mahjarrat Lucien, forming an alliance with the Guardians of Armadyl and the Guthixian Crux Eqal. He was friends with Silif, who worked as his assistant. He tolerated representatives of other religions, but sometimes made snide comments about them.[1] He resided in the White Knights' Castle in Falador.

He worked out a plan for locating Lucien, which involved infiltrating Lucien's spy network by capturing a spy in Draynor. He had originally planned on having Silif plant a teleorb on the spy but changed his mind when an adventurer appeared. He tasked the adventurer with capturing the spy instead. The spy was successfully captured, but incompetence on the Crux Eqal's part led to the interrogation being delayed. While a batch of super truth serum was prepared, the alliance began recruiting powerful heroes, Slayer Masters and warriors. The spy told them about Dark Squall and Akrisae had Silif spy on the mage, who had been seen near the Black Knights' Fortress. However, Silif was captured while the adventurer was recruiting more heroes, and Akrisae asked them to find the spy. When Silif was rescued and Dark Squall, then revealed to be Surok Magis, was captured, they managed to locate Lucien's camp and sent the eight gathered warriors and the adventurer to ambush the mahjarrat. The adventurer was sent under the guise of Surok, when Akrisae teleswitched them with Surok. However, the attempt backfired, resulting in most of the heroes being killed. 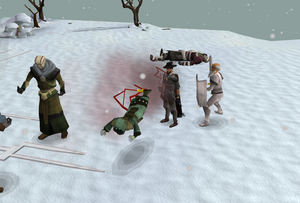 He continued working with Crux Eqal and the Guardians of Armadyl, seeking a way to deal with Lucien. As the syzygy approached, Lucien, having obtained the Stone of Jas, planned to use it to dominate the upcoming Ritual of Rejuvenation, which would have attracted the attention of the dragonkin. Ali the Wise, a Zarosian scholar, proposed forming an alliance with the Zarosian Mahjarrat. Akrisae initially rejected this, and had to be convinced. He tasked the adventurer who had previously helped them with ensuring they could get their troops in stealthily and making preparations to steal the Stone of Jas from Lucien. Several Temple Knights, druids and guardians of Armadyl snuck into the Mahjarrat Ritual Site, and Akrisae, alongside a consignment of Temple Knights, the adventurer and Ali the Wise, attempted to take the site, but General Khazard stopped them. Khazard broke through Ali's disguise, revealing him to be the Mahjarrat Wahisietel, then attacked the group. They overcame him and he fled, and they proceeded to the site. They found it empty, but Lucien appeared shortly after and attacked them. Sir Tiffy Cashien ordered Idria to bring all the troops she could to the battle, and he acted as a healer for their forces. More Mahjarrat arrived, bringing reinforcements and artefacts such as the Barrows brothers, Arrav and the Stone of Jas. Lucien accidentally summoned Sithaph and Strisath, who killed Idria and soon the Mahjarrat himself. Sliske attempted to turn the adventurer into a wight, but Akrisae intervened, taking the damage instead and becoming Akrisae the Doomed.

Akrisae was later freed from Sliske's control along with the other Barrows brothers, though he did not participate in the battle which led to their freedom.

In combat, Akrisae acts as support, using Heal Other to heal his allies.