From the RuneScape Wiki, the wiki for all things RuneScape
Jump to: navigation, search
Loading...
HumanYeti 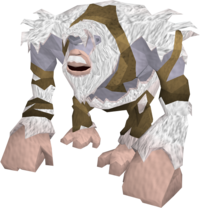 As a human he was married to Freygerd, the sister of Mawnis Burowgar. One day he went on an adventure with a team made up of Baba Yaga, Mawnis Burowgar, the then heir-apparent King Vargas, a young but overly ambitious Brundt the Chieftain and Asleif Hamalsdotter, a healer from the Mountain Tribe to find the last tablet of a hidden prophecy in a cave housing a gnoeals. After finding the location of the last tablet, the group fought with a gnoeal. Nial was hit with the gnoeal's cursed goo, turning him into a yeti. Some of the spit that hit Nial also hit Vargas, causing him to also turn into a yeti. Vargas did not lose his sanity like Nial did, as he did not come into contact with most of the spit, which had unfortunately landed on Nial. His wife, Freygerd, has been lamenting his death, and has been worried that he was not at peace.

During the quest, the player must fight and kill him. He is found in an ice dungeon under the Rellekka Hunter area. He attacks with melee and ranged and has the ability to knock back the player with a roar. Players should bring their best melee armour for its defence bonuses against ranged and melee. After he is dead, the player gives his throwing axe to his wife Freygerd, who then decides to move back to Neitiznot.

During Blood Runs Deep, Nial is met alongside Asleif in the Fremennik spiritual realm following the player's initial death. During this time they reflect on experiences from Glorious Memories.

Nial's yeti form is fight-able as a class X2 boss monster in the Dominion Tower minigame if the player has completed the quest Glorious Memories.

A similar strategy to the Giant Roc from the My Arm's Big Adventure quest can be used by backing up against a wall. Protection from Melee or Ranged can nullify one of his attacks. Super potions can make the fight go a lot faster, and food such as monkfish (or better) is recommended. Using a Dragon dagger, or any other fast weapon, is quite effective.