From the RuneScape Wiki, the wiki for all things RuneScape
Jump to navigation Jump to search
The Old School RuneScape Wiki also has an article on: osrsw:Koschei the Deathless 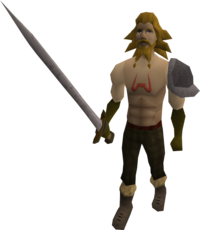 Koschei the Deathless is an alter ego of the Mahjarrat Kharshai. Until completion of Koschei's Troubles, his true identity is not known to either the player or himself.

He is fought as part of the Thorvald the Warrior's challenge during The Fremennik Trials. He can be found in the basement of Skulgrimen's Battle Gear in Rellekka. His combat level is not shown, but he will get progressively stronger and gains increased life points, defence, and strength each time he is defeated. Although the fourth form is difficult, it is not impossible to defeat him. If he is defeated the player will be rewarded with a Fremennik blade. His fourth form uses incredibly fast attacks that hit less than his previous ones; however, the attack speed more than compensates for the lower damage dealt.

He can be fought again after the quest as a Class E boss in the Dominion Tower with the same moves and abilities as he had in the quest, but he can now be fought with armour and weapons. 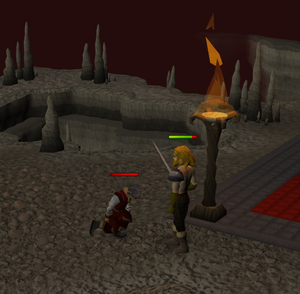 As no weapons or armour can be used, it is recommended to switch to Legacy Mode to fight Koschei unarmed. He is not difficult for mid to high level players and can be defeated with little to no food, though it is still recommended to bring some. Rings of recoil will help for the fight, especially for lower levels.

If he has been killed three times and the player tries to kill him a fourth time but is unable to, the trial will still be deemed as a success. Once the player's life points reach ten, they will kneel down and be transported back to Thorvald, still completing the trial if they are on his fourth form. Dying on the fourth form only is counted as a safe death for Hardcore Ironman accounts - dying to any of the previous forms will result in a normal death for hardcore and non-hardcore accounts alike.

It is possible to smuggle certain weapons into Koschei's chamber, as an unhilted godsword can be taken.