From the RuneScape Wiki, the wiki for all things RuneScape
Jump to navigation Jump to search
The Old School RuneScape Wiki also has an article on: osrsw:Elidinis

Elidinis is the Menaphite Goddess of Fertility and Growth, and is heavily associated with the River Elid. She is also the wife of Tumeken, the mother of Icthlarin and Amascut, and one of the four major gods of the Menaphite Pantheon. She plays a key part of the quest Spirits of the Elid. She is described by Senliten as "The water that gives life and soothes". Elidinis is mainly worshipped by the peoples of the desert. The centre of her worship is the town of Nardah. In Nardah, there is a shrine to Elidinis (Elidinis Statuette), provided by the god herself to Nardarine, a refugee of the God Wars, who went on to found and lead Nardah. Like most of the other gods, she was forced to leave after the God Wars due to the Edicts of Guthix.[2]

Despite being a founder of Kharidian society and the only member of the desert pantheon that was not created directly or indirectly by her husband, very little is known about Elidinis. The accomplishments of her husband have seemed to have overshadowed her own, even though evidence has suggested that she was a widely worshipped and respected god by the Menaphites before the Kharidian Desert Campaign.

Elidinis, like many other gods at the time, arrived on Gielinor early in the Second Age. She was one of the two gods known to arrive in the area of Kharidian, the other being Tumeken. It is unknown which arrived first, however, according to legend, the two gods met on the bank of the River Elid. Shortly after, the gods were wed and Elidinis produced Tumeken two children. These were the demigods Icthlarin and Amascut. The family would found an empire in the area of Kharidian, becoming the four major desert gods. Tumeken would create the four minor gods of the pantheon, Het, Crondis, Apmeken, and Scabaras, to help guide Menaphite society.

However, the Kharidian Empire would be invaded from the north by the god Zaros and the Menaphites were driven further and further back in the Kharidian-Zarosian War. It is unknown what role Elidinis played in the war, but Icthlarin and Amascut, seeking help, travelled to other realms. They came upon the realm of Freneskae and found the Mahjarrat, a tribe of very powerful mortals. They convinced Mahjarrat to come to Gielinor, where their deployment reversed the tide of the war, driving the Zarosians back north. But when victory seemed to be assured, there was a schism within the Mahjarrat, with a majority siding with Zaros. This reversed the tide of the war once again, the Mahjarrat and Zarosian reinforcements driving the Menaphites southward once more. This time Tumeken himself directly intervened standing between the two armies; he exploded himself in a great ball of fire. The blast killed thousands on both sides and turned much of Kharidian into a barren desert. 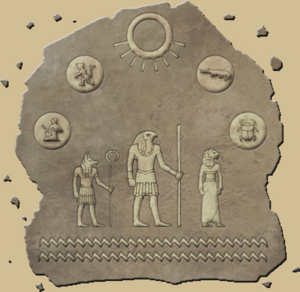 During the Gielinorian God Wars the desert held out relatively unaffected for three millennia compared to the rest of the Gielinor. This may have been due to an alliance she made with the god Saradomin. However during the last millennium of the wars Zamorak launched a massive invasion called the Kharidian Desert Campaign that would lead to the destruction of first Uzer and then Ullek. A piece of smelly papyrus found in the ruins of the latter laments that Elidinis had forsaken them. This may suggest that the goddess did nothing to stop the destruction of the two cities, though there is no other evidence to support this.

Shortly after the destruction of Uzer by the elder demon Thammaron, a refugee named Nardarine tried fleeing the fighting of the forces between Saradomin and Zamorak by venturing into the harsh desert, with no water. Nardarine cried out to Saradomin for help, but he did not answer her and it was Elidinis who responded to her prayers. She gave Nardarine some water and asked the woman a question: "Would she worship Elidinis if the goddess helped her?"

Nardarine accepted and took an oath to Elidinis who then created the a Statuette for her to worship. Nardarine drank from the water of the Elid and Elidinis gave her food. To thank Elidinis for her generosity, Nardarine built a town near the Elid which she named Nardah after herself, and anyone who sought to live there needed to take the oath of loyalty to Elidinis.

After the destruction of the Forinthry region to the north by Zamorak, Guthix awoke and banished every god of sufficient power from Gielinor. Elidinis was affected by this and was forced to leave, though her children Icthlarin and Amascut could stay due to their lack of power.

With her banishment, Elidinis' influence over the desert has waned, being supplanted by her children as well as the lesser gods of the pantheon. Her main centre of worship is Nardah. In the year 169 of the Fifth Age, the town discovered it could no longer draw water from the river Elid without it evaporating. They were forced to buy water from the nearby Pollnivneach, costing the town great sums of money. Thankfully, an adventurer found the cause of the calamity was a curse placed on the town by the Spirits of the Elid after a Saradomist priest desecrated the Elidinis Statuette. The Statuette was found and returned to the shrine and the curse over the town was lifted.

At some point, she visited a world inhabited by beings similar, but unrelated to, spiders while searching for an artefact referred to as Aragnya's Veil. This object has the magical ability to mask objects and beings as something they are not, or change the appearance of reality, which the spider-like species despised and hid away. Elidinis met one of these beings, 0078, and interrogated it about the Veil. 0078 talked about how its species despised the Veil and its creator due to using its magic to deceive others, which goes against their philosophy of truth and logic, as well as how they killed the children of Aragnya due to having "unruly genes". Elidinis was able to ascertain the location of the Veil but found the slaughter of the thousands of Aragnya's children to be "wretched", and tasked 0078 to make a recording of their encounter before killing 0078 and the rest of its species. Elidinis presumably found and claimed the Veil as her own afterwards.

With the coming of the Sixth Age, Elidinis has not returned to Gielinor.