The Smuggler is a mysterious man that plays a key role in the Dungeoneering skill. He is responsible for guiding players into Daemonheim, and is found in the first room of every dungeon. He runs a shop that may be bought from or sold to, with his stock varied based on the complexity set. He may also provide information on that floor's boss once the boss room has been found, and guides players through the Dungeoneering tutorial.

He is also responsible for smuggling items out of Daemonheim for Marmaros to sell to players for reward tokens, giving him his name.

There is a lot of mystery behind the Smuggler's past, as a number of letters and objects in Daemonheim appear to either reference him or have unique dialogue when shown to him.

Thok, the Fremennik who encountered the white-bearded man at the bottom of Daemonheim

According to a letter written by Thok Thokson, when he and Marmaros reached the bottom of Daemonheim, they encountered a "white-bearded man", who Thok described as "looking like Fremennik but smells clean", and "more powerful than Thok". The white-bearded man told Thok that he was not chosen to see what was at the bottom, and proceeded to heal Thok's leg and Marmaros's broken arms. This man then offered to guide Thok and Marmaros back to the surface, and refused to take no for an answer, eventually causing Thok to relent, knowing that the man was right.[1] Thok and Marmaros lost most of their memories of what had occurred sometime after they left Daemonheim, but whether the white-bearded man was responsible for this is unknown.[2]

The man seemingly accompanied Thok and Marmaros back to Rellekka, and Brundt - the chieftain of Rellekka - wrote a letter to the man and made him an honourary Fremennik for his bravery, although questioned how he was able to get past the protective barriers that the Fremennik seers had created. After hearing of the horrors of Daemonheim, Brundt sent word to the adventurers of Gielinor to help drive back the taint of Daemonheim, and requested that the white-bearded man accompany them into the dungeons as their guide. He then gave the man furs, a helmet and some boots, and requested that the god that has protected him to remain vigilant.[3]

Although the Smuggler clearly matches the description of this man, possessing both the white beard and the furs, helmet and boots given to him by Brundt, he denies that the letter belongs to him, although the player does not believe him.[4] When Marmaros learns that a "white-bearded man" was responsible for saving him, he expresses surprise, and claims to have an idea as to who he is, and that he needs to talk to someone with a lot of explaining to do.[5]

When shown Letter to an acolyte, the smuggler acts very uneasy, demands that the player give it to him, asks if they read it, and demands that they forget about it.[6] This letter is addressed to an unnamed acolyte and is written by the acolyte's "brothers and sisters". The letter says that while the acolyte's service to "our cause" was appreciated, their time with "us" must come to an end, and that the authors hope that the acolyte's faith will not be swayed, and that the decision to terminate them will not upset the memories of "this place they call home". The authors then wish the acolyte success on their road ahead, and claim that they will be thinking and praying that they find a purpose in "this world and the next".[7]

When shown a strange token that bears a great resemblance to a fist of guthix token, the Smuggler uneasily says that he's never seen anything like it before, and hastily claims that it does not belong to him, although the player does not believe him.[8] Both the letter and token are described as looking like they don't belong in Daemonheim.

The smugger's shop only offers what is able to be used at the current dungeon's Complexity. Thus, the stock is expanded along with the complexity level. While resources used to create weapons and armour include all ten tiers (free players only access the first five tiers), tools and other finished items with a tier rating are limited to the first three tiers. The exceptions to this are shortbows, longbows, rapiers, staves, and kiteshields, which are limited to the first tier. Most items can be sold to the shop, with major exceptions being coins, gatestones, journals, bound items, anything brought from the surface, divine energy and memories, and some puzzle room items. However, the Low Level Alchemy and High Level Alchemy spells will give 133% and 200% of the shop price respectively. The smuggler's shop is not available on complexity level 1.

Completing the Daemonheim Tasks will give a 10% discount from the Smuggler. 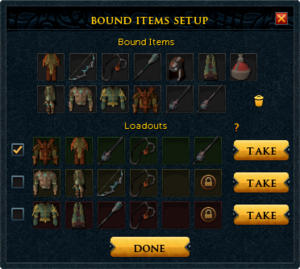 After an update on 13 November 2012, you can talk to the smuggler to choose up to 3 presets of combinations of different binds that you want to use for the floor. This can be done by dragging items from the pool of binds that you have (the pool of binds can hold up to 10 items, or 12 with the hard Daemonheim achievements complete). With the completion of the medium Daemonheim achievements, you may also bind a potion. The number of bound items you can use at once depends on your Dungeoneering level:

When you start a dungeoneering floor you receive some starting items. By default you receive some coins. You can talk to the Smuggler to switch between receiving coins or receiving 50 feathers, 25 rune essence, and an antipoison.

It is recommended to switch from coins to these items to speed the start of your floor. The number of items received does not change, even if more coins are received when starting as a reward for completing Daemonheim Tasks.