From the RuneScape Wiki, the wiki for all things RuneScape
Jump to: navigation, search
The Old School RuneScape Wiki also has an article on: osrsw:Gunthor the Brave
This article is about the historical NPC. For chieftain of the barbarians, see Chieftain Gunthor. 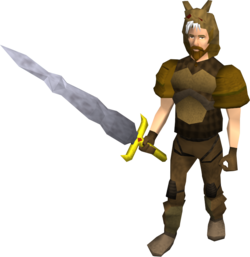 Gunthor the Brave was a level 29 barbarian who lived in Barbarian Village. He was located in the Long Hall in the northern part of the village. He was stated to be a mighty warrior and a chieftain of the barbarians. On 21 September 2010, he was removed from the game and replaced with Chieftain Gunthor. Haakon the Champion replaced him as the new attackable boss of Barbarian Village.

Players could either fight him with melee combat, Ranged, or Magic. Like all barbarians from Barbarian Village (except for Litara and Peksa), if a player talked to Gunthor, the player would be attacked.

Players who fought him with melee generally only wanted to fight Gunthor when they had a Defence level of at least 20 (as he could hit often and deal 30 or 40 life points), as well as a weapon better than iron. Players who attacked him using Ranged or Magic could do so safely from behind the tables or stools. He was weak to Magic and Ranged.

Gunthor the Brave was the highest level barbarian in Barbarian Village.