From the RuneScape Wiki, the wiki for all things RuneScape
Jump to: navigation, search
The Old School RuneScape Wiki also has an article on: osrsw:The Kendal (God) 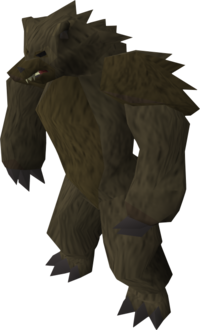 A man impersonating the Kendal.

The Kendal is a god of the mountain from the Mountain Tribe's legends.

During the Mountain Daughter quest, a man impersonates the Kendal because the Mountain Tribe are scared of their gods and magic, and he desires to be left alone. He also kills Asleif, the chieftain's daughter.

According to the imposter, The Kendal is the guardian of the mountain, god of the northern lands, and able to move the earth and control the skies. The Mountain Tribe planted trees to block the entrance to the cave where the imposter lives because they thought it was unwise to come too close to what they believed to be a god.