From the RuneScape Wiki, the wiki for all things RuneScape
Jump to: navigation, search
The Old School RuneScape Wiki also has an article on: osrsw:Bardur 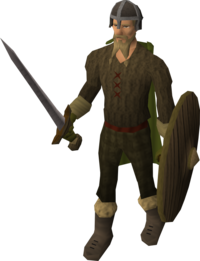 Bardur is a Fremennik warrior found deep inside the Waterbirth Island Dungeon, fighting a group of Dagannoth fledglings. He will trade the player a cooked shark in exchange for a Fremennik blade, shield, or helm, all of which are obtainable as drops from Dagannoths.

In the Blood Runs Deep quest, Bardur appears outside Waterbirth Dungeon and tells the player that the other entrance to the dungeon is on the south side of the island. He also gives the player a free rope to use to descend into the hole.

Players may attack and even kill Bardur, but doing so takes a substantial amount of time, as he is level 200, has 150,000 life points and a very high defence level. Despite his high combat and defence levels, he does not hit very high, and prioritizes fledglings over the player. He is also unable to move from his spot, allowing rangers and mages to take him out without taking any damage. Killing him gives no combat experience, and he drops nothing besides bones.