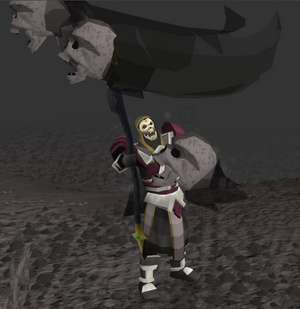 The spell in use.

Ika tha nke rius Zanka Tdaterius is a powerful necromantic incantation used by the Mahjarrat Lucien during While Guthix Sleeps. He uses it to summon a small army of Undead heroes.

It is not known if the incantation is spell or a phrase in a foreign language (possibly Mahjarrat). With the power of the staff of Armadyl, it is possible that Lucien increased the power of a normally weaker spell.