From the RuneScape Wiki, the wiki for all things RuneScape
Jump to navigation Jump to search
The Old School RuneScape Wiki also has an article on: osrsw:Moon Clan

The Moon Clan is a tribe of magically and telepathically skilled humans residing on Lunar Isle. The clan has no formal political leader, each member of the clan possessing equal rights, but the Oneiromancer, a powerful mage, is their spiritual leader, presiding over their initiation rituals.[1] The clan is believed to take its name from the crescent-shaped isle it lives on. The Moon Clan is in a bitter and ancient war with the rest of the Fremennik. This feud goes back thousands of years and is fed in part by the clan's refusal to share the secrets of their magic with the Fremennik, the clan's use of magic in everyday life, and the Fremennik's great mistrust of magic users. During the Lunar Diplomacy and Dream Mentor quests, the player discovers more about the Moon Clan.

The Moon Clan were founded by the Fremennik seer V at some point after he discovered the Stone of Jas in a cave on Lunar Isle. Touching the stone had unlocked something in his mind and given him great power. However, the stone was immediately taken away by mysterious entities dubbed "those powers who walk a higher astral path". V used his newfound power to become one of the Fremennik's greatest heroes, starting by slaying a giant basilisk. He also discovered the art of runecrafting, finding rune essence where the stone had laid, and travelled across the world with his followers constructing altars at places of power. The relationship between the different Fremennik groups was still good at this time, and they would gather at a trading post to trade. At this time, V was only concerned with teaching his people simple magic that would help in their nomadic lifestyle - spells of wind and water, unlike the much more advanced magic that the Moon Clan would later develop.

V later ascended to godhood and protected the Fremennik throughout the God Wars. When V left at the end of the God Wars after the establishment of the Edicts of Guthix, however, tensions began to rise among the Fremennik. Many felt that runecrafting was only reserved for the gods, while the Moon Clan believed it should be used to defend against their enemies. Eventually, the disagreement came to blows, and the Moon Clan were expelled from the rest of the Fremennik.

Since the split, the relationship between the Moon Clan and the Fremennik has fluctuated between peace and war. Finally, in the 5th age, the Fremennik went on a rampage destroying the entrances to the Runecrafting altars. This prevented the Moon Clan from being able to make runes, and contact with the Fremennik ceased completely. In isolation on Lunar Isle, however, the Moon Clan's magical abilities advanced so that they no longer needed runes to focus their magic.

By 169 of the 5th age, the Moon Clan were still at war with the Fremennik, but during the quest Lunar Diplomacy the player travels to Lunar Isle and manages to ease tensions between the two groups.

The Moon clan believe that magic is a power innate to every creature and that therefore the key to understanding it is to understand oneself.[2] As a result, knowledge of self is one of the Moon Clan's most important values.[3] The Moon Clan's primary means of attaining such self-knowledge is through dreams, which are considered pure manifestations of the subconscious.[2] Aiding them in this task is Lunar Isle itself, which is believed to have a strong connection to the moon, which in turn has a connection to dreams.[4] Nevertheless the Moon Clan are highly secretive, possessing a "Secret Tongue" and refusing to share their secrets with the Fremennik.

The Moon Clan utilise the moon in many of their spells and rituals. Their ability to read the minds of others comes from learning to sense a resonance responded to by the moon, which changes depending on what someone is thinking. Refining this skill is a lifelong task, although it is easy to read the minds of outsiders as their thoughts are loud and unguarded. [5]

Every member of the clan have to go through a ritual known as the "The View of Self Dream", usually after years of preparation,[2] wherein they enter the land of dreams while awake. This is an especially dangerous ritual as many people have gone insane from visiting their own dreams.[6] The ritual begins when initiates wearing ceremonial clothing soak kindling from the first magic tree in a waking sleep potion and burn it in a Ceremonial Brazier. The initiate is then transported to the dream world. During Lunar Diplomacy the player takes part in this ritual and learns six important lessons before fighting themselves. 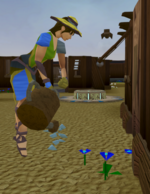