From the RuneScape Wiki, the wiki for all things RuneScape
Jump to navigation Jump to search
The Old School RuneScape Wiki also has an article on: osrsw:Pontak
Pontak? (edit) 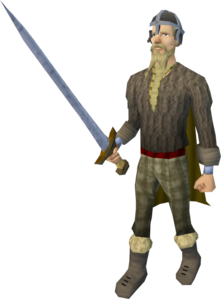 Pontak is a farmer in the southeastern corner of Rellekka. During The Fremennik Trials, the player must gain votes of Rellekka's council members to become an honourary citizen, and Pontak is one them.

To gain his vote, he asks the player to collect the following items for him:

Since none of these items exist, it's deduced that he is simply brushing the player off to let them know that he will never vote for them.

Pontak can also be pickpocketed 40 coins. He is ideally the Fremennik citizen to pickpocket for Thieving training since he cannot leave his house. He cannot be attacked, though his combat level is 56.

During Blood Runs Deep, he helps defend Rellekka from the invading Dagannoth.

In the 10th Postbag from the Hedge, Pontak bemoans that the player was able to get votes from the rest of the council members, saying that any level 1 Fremennik worth his boots would be able to find the items he asked for. He says that the trials are much easier than they used to be, what with teleporting. If it were up to him, the trials would include centaur riding, Rocnar-slaying and Guthix-baiting.