Ghorrock in relation to other areas today

Ghorrock is an abandoned Zarosian fortress located in The North. Only the lower two above-ground floors, the two dungeon levels, and the exterior can currently be accessed. There is at least one more floor that cannot be reached as well as numerous doors and trapdoors that cannot be opened. The fortress is entered via arches in the southern wall. An intact statue of General Khazard is present in the fortress's courtyard. Completing a small portion of The Temple at Senntisten is required to melt the Ice Block and enter the fortress.

Ghorrock was originally built by the sixth legion and is large enough to house 10,000 humans.[1] Until the addition of The Temple at Senntisten quest, Ghorrock was believed to have been destroyed during the God Wars, like the rest of Zaros's settlements (e.g. Carrallangar). The location at which the Ghorrock Teleport leaves players, in the Frozen Waste Plateau, suggested that the fortress had been completely destroyed, with no existing remains. However, the quest revealed that Ghorrock actually still remains, albeit being farther north-west than previously believed. This means that Ghorrock is the last of the Second Age Zarosian settlements still in existence.

The last record of inhabitants was left by Lamarinta, Matriarch of Ghorrock, when she noted that Ali the Wise had brought news of the end of the God Wars. By then, there were barely a hundred residents, and even those had to keep their worship of Zaros a secret.[2]

Ghorrock houses a legendary artefact, called Frostenhorn in human tongue by the Fremennik. It is actually not a horn that freezes, but a horn that magnifies power, in this case the cold climate of the location.[3] An ice demon had possession of the horn until year 169 of the Fifth Age, when an adventurer tasked by Azzanadra was sent to retrieve it, killing the demon. With the removal of the Frostenhorn, the fortress' dungeon began to thaw[4], creating many waterfiends and icefiends.

Ghorrock can only be accessed upon reaching a certain stage of The Temple at Senntisten quest.

There are several other less-recommended ways to access this fairly isolated part of the world:

Iron and steel dragons patrol the grounds surrounding the structure.

During The Temple at Senntisten the fortress's dungeon is home to a small number of waterfiends variants that are immune to fire spells and icefiends as well as the ice demon. After the quest, the dungeon contains a large number of aggressive level 107 icefiends on the top floor and level 102 waterfiends on the lower. 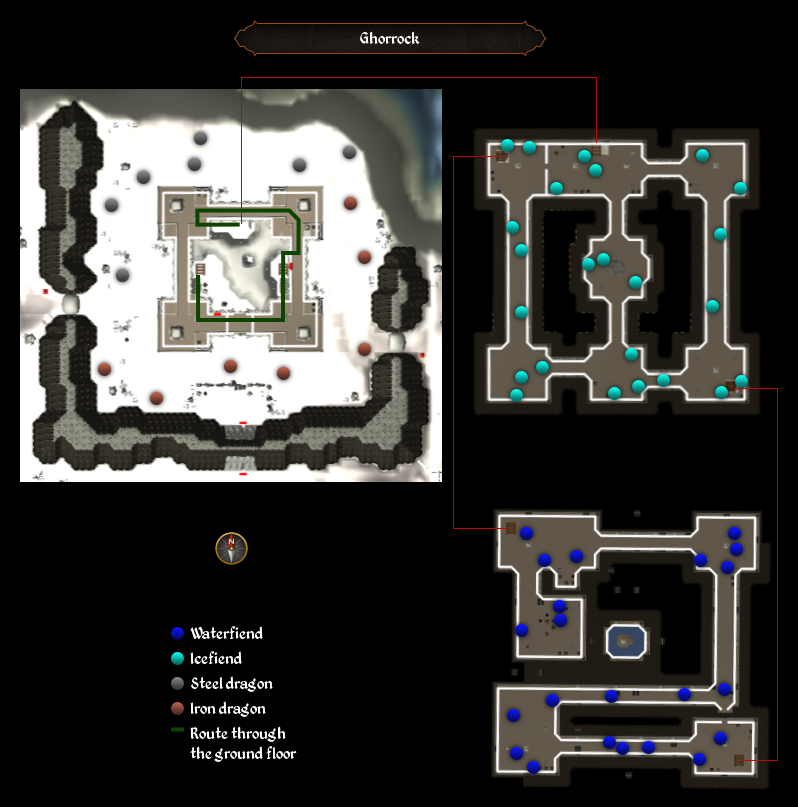