The Senntisten Dig Site is a mini-dig site located in Senntisten, requiring level 60 Archaeology to be interacted with. The excavations are recorded as part of the Zarosian culture grouping in the Archaeology journal.

Excavation sites in the north-west area are in the Nodon Front of the Elder God Wars Dungeon. The monsters there are aggressive unless the Shard of Erebus is equipped.

In order to unlock this digsite, players first need to obtain level 60 Archaeology.

For low-level players a shard of Erebus is not absolutely necessary but helpful for travelling to the three excavations within the Nodon Front, as it prevents monster aggression in the area. While monsters do not generally attack while the player is adjacent to the remains itself, for the Inquisitor remains in particular it is possible to take aggro if the monsters are being fought by other players.

Any of the following may be used to get to Senntisten Dig Site. 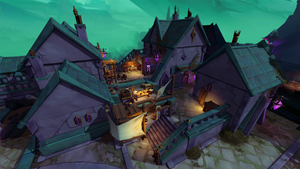 The Senntisten Dig Site's base camp is located north-east of the cathedral or south-east of the main entrance to the city. As with all dig sites, it features an archaeologist's workbench, a bank chest and a material storage container.

The soil for this dig site is ancient gravel, and excavating at any of the hotspots also yields ancient glass shards that can be used to repair the shadow, ice, blood, and smoke broken stained glass windows in the city's cathedral.

Reaching the citizen remains requires the completion of the Crossing that Bridge research.

The collections below are fulfilled with items from the Senntisten Dig Site.

The dig site adds one new Archaeology relic which may be added to the mysterious monolith at the Archaeology Campus for a new relic power:

This information has been compiled as part of the update history project. Some updates may not be included - see here for how to help out!
Retrieved from ‘https://runescape.wiki/w/Senntisten_Dig_Site?oldid=35817141’
Categories:
Hidden categories: